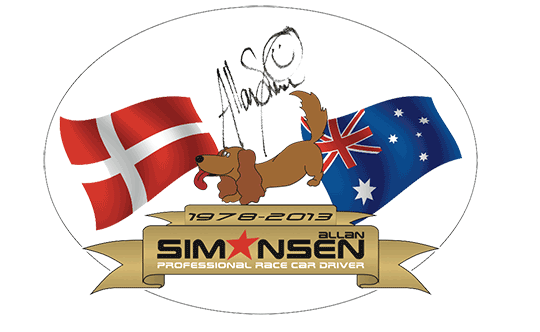 All cars competing at the Sucrogen Townsville 400 in July will display special tribute stickers in memory of Allan Simonsen.

Entrants from V8 Supercars, the V8 Dunlop series, V8 Utes, Porsche Carrera Cup and Formula Ford will all carry the sticker as a mark of respect to the popular Danish driver who died as a result of injuries sustained from a high-speed crash in this year’s 24 Hours Le Mans race.

The 34-year old raced regularly in Australia, competing in the V8 Ute Series in 2005, winning the Australian GT Championship in 2007 and making several V8 Supercars endurance race starts over the last decade. Simonsen was also set to join forces with David Wall in the Brad Jones Racing Wilson Security Commodore at the enduros later this year.

The tribute sticker which includes Simonsen’s personal logo, a sausage dog and the Australian and Danish flags, was designed by his close friend Jon Hart and automotive graphic artist Dane Child of Armageddon Designs. The sausage dog, which belongs to Hart, was adored by Simonsen, calling it his “southern hemisphere dog”.

Earlier this week, Brad Jones Racing announced the team will honour Simonsen in the V8 Supercars endurance rounds later this year with a tribute similar to that displayed on all of its cars in memory of former BJR driver Jason Richards.

A special tribute is also being organised for the next round of the Australian GT Championship at Sydney Motorsport Park in July.