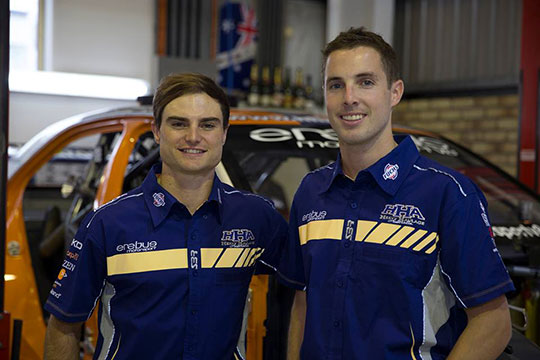 Erebus Motorsport V8 has announced that Andrew Thompson will team up with Tim Slade in the Heavy Haulage Racing entry for this year’s endurance events.

The pair first teamed up last year under the Stone Brothers Racing banner, netting a pair of seventh place finishes in the 2012 Sandown and Bathurst races.

This year Thompson will also join Slade for the Gold Coast600, an event he has contested many times, as an endurance regular and in the main game in 2008. The 2011 Development Series champion hopes this will give them an advantage over some other co-drivers who are not as familiar with the street circuit.

“I’m happy to be back for a second year and having driven together before we know what each other are like to work with and I know the team. So for me I don’t have to start fresh on learning about a new driver and team,” said Thompson.

“We had a great run last year and I think there are still a lot of improvements Tim and myself can make. If I do my job well then I think we can make a step up on last year, although they are long races and anything can happen.

“I am racing the three endurance events this year and I really like the GC600 track because it is really different to Sandown and Bathurst with its concrete walls, and there is no room for error.

“I’m looking forward to the three races and getting back into the car to do some driving.”

Thompson has already tested the #47 Heavy Haulage Racing E63 AMG and will have more seat time in Friday’s co-driver practice session at the Townsville 400.

“I’m really happy to have Andrew co-driving with me again this year because he did such an awesome job last year,” said Slade.

“When the discussion came up about co-drivers the one and only name to pop up in my head was his, so to have that continuity is really good.

“I am hoping we can repeat our performance from last year, and at the moment we are progressing with our cars so hopefully we will be in a position where this is possible.

“This year’s endurance races will be a little unknown for all the teams as we haven’t really had any long races this year in the new cars.

“Last year Andrew and I finished Sandown and Bathurst in the top seven, and this year he will also be driving the GC 600 with me. This is the first time we have had one co-driver complete all three of the Endurance Series races which means that continuity will carry through.

“He has an advantage over some other co-drivers for that race because he has driven the street circuit a number of times as a main driver in the V8 Supercar Championship. So he has good knowledge of the track which is an added bonus for me.”