The V8 Supercars return to North Queensland this weekend for the fifth running of the Sucrogen Townsville 400.

The 2.86 kilometre circuit which winds its way through Reid Park in Townsville is a hybrid, comprising a combination (two-thirds) of a Mark Skaife designed purpose built track coupled with a street section, made up of public roads.

Fast and flowing, it has some big kerbs and a lot of character for such a short track. Two very long loaded corners punish the left rear tyres, and without any real long straights the circuit is demanding on both cars and drivers. There are plenty of overtaking opportunities, but with the return of the longer-distance event, the result will likely be determined on strategy.

The 2013 Sucrogen Townsville 400 also marks the reurn of refuelling. It’s one of just six events this season with fuel stops and is the first event since the season-opening Clipsal 500 Adelaide. Both soft and hard tyre compounds must also be used in each of the 200km races.

Red Bull Racing Australia’s Jamie Whincup will start favourite for the event, based on his solid record at the Townsville and his recent form in the championship, including seven race wins this year. Of the eight races contested on the Reid Park circuit, Whincup has finished in the top two in all but one race. He’s won five races in total, including last year’s clean sweep. 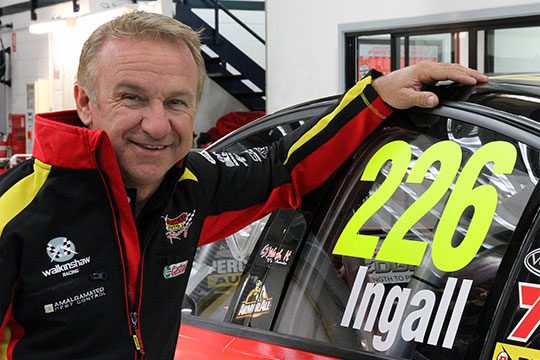 2005 title holder Russell Ingall (Supercheap Auto Racing) will make his record 226th Australian Touring Car Championship / V8 Supercars Championship start,officially breaking John Bowe’s record and his car will carry the commemorative number 226 this weekend. Between 1996 and 2002 Ingall made 82 starts with Perkins Engineering, 66 with Stone Brothers Racing, including a championship in 2005 (2003-2007), 56 with Paul Morris Motorsport (2008-2011) and this weekend marks his 22nd event start with Walkinshaw Racing.

Supporting the main series will be round three of the Dunlop Series, the Porsche Carrera Cup and the V8 Ute series.

All cars competing at the 2013 Sucrogen Townsville 400 event will display special tribute stickers in memory of Allan Simonsen, the late V8 Supercars endurance regular who died as a result of injuries sustained from a high-speed crash in this year’s 24 Hours Le Mans race. 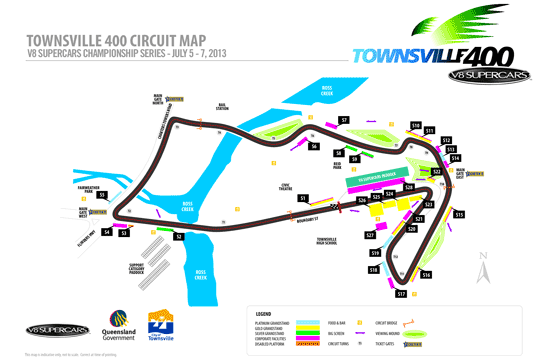 Construction of the complex for the three-day race weekend takes six weeks, using 1295 concrete blocks and 1545 debris fences and is usually completed on the Thursday prior to the event. Post event, it takes three weeks to de-construct.

The pit lane buildings utilised by the teams are part of the permanent section of track, and are used throughout the year for conferences, functions, meetings and local education groups.

Tyre Allocation: 12 x Hard and 8 x Soft across the weekend. Only the hard compound may be used in Practice and Qualifying. Softs can only be introduced for the Top-10 Shootout, and the races. Both types of tyre must be used in each of the 200km races.