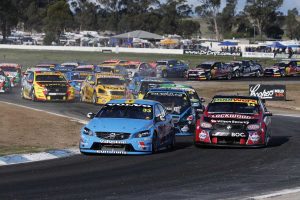 The specifications for the next generation of Supercars have been agreed upon by teams for a 2017 debut.

Fans will have to wait for the end of this season to find out what changes the new rules bring, if any.

Speculation has been rife this year about potential engine downsizing and the option for teams to move away from the four door sedan platform.

The new rules will outline exactly which engine and chassis configurations teams will be able to run in the championship in 2017.

All team owners signed off on the agreement with V8 Supercars on Thursday at an annual general meeting.

A proposed rebranding for the category for the 2015 season was also outlined for the teams.

The new specifications will come in to play following the withdrawal of Holden and Ford production in Australia which will see the Commodore and Falcon replaced with imports.

Currently Nissan Motorsport and Volvo Polestar Racing are competing in cars that do not have a direct road going counterpart as neither manufacturer produce a rear wheel drive V8 for the road. A shift in specification could allow them to align their race cars with their road-going counterparts.

“We presented the recommendations and the branding,” confirmed V8 Supercars CEO James Warburton.

“It was a really good discussion with lots of healthy debate.

“There was universal support in terms of direction. Clearly from here there are a lot of technical aspects to be investigated. We will regroup and hope to make the announcement no later than the Sydney NRMA 500.”

The specific technical rules will be refined in the months following the announcement as the teams prepare new chassis and powerplants for the 2017 season.