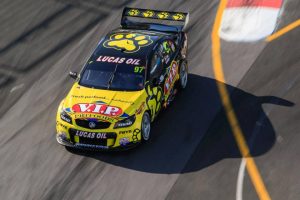 Shane van Gisbergen’s Bathurst nightmare will be a distant memory after winning the opening race of the Gold Coast 600 alongside Jonathon Webb.

The Tekno Autosport drivers put on a dominant display, keeping championship leader Jamie Whincup at bay to take his fourth win of the year.

Third place was the subject of controversy after Mark Winterbottom looked to have secured the position over Tim Slade in a drag race to the line. Slade had been valiantly holding off the hard charging Falcon of Winterbottom but contact between the two saw the Ford driver cross the line in third with teammate Steve Owen. Winterbottom was declared to have made illegal contact which saw the position handed back to Slade and Tony D’Alberto.

Nissan Motorsport had one positive in the fifth place of Michael Caruso and Dean Fiore after losing the Todd Kelly and Alex Buncombe car to power steering failure and having their other two cars finish outside the top ten.

Chaz Mostert and Paul Morris pulled off another miracle drive after starting 19th and dropping a lap early in the race. Mostert managed to un-lap himself with pace and with the help of a safety car drove to sixth place.

The leading Volvo of Scott McLaughlin and Alexandre Premat failed to capitalise on a second place start after an alternate strategy failed to yield results despite their fast race pace.

Dick Johnson Racing also put their Bathurst woes behind them with Scott Pye and Ash Walsh driving the Wilson Security Falcon to 8th.

Russell Ingall was the race’s biggest mover after coming from the back of the grid to finish 9th alongside Tim Blanchard.

Holden Racing Team had to settle for rounding out the top ten with Garth Tander and Warren Luff despite looking promising for a podium finish. Contact with a tyre bundle damaged the front of the Commodore saw the pair’s chances fade in the final stint. The weekend started off even worse for the second HRT car with James Courtney and Greg Murphy crashing out only seconds into the race. Murphy was attempting pass the stalled Nissan of David Russell when the pair made contact, forcing the Commodore into the wall.

Other high profile DNFs included the Falcon of David Reynolds and Dean Canto who hit the concrete wall at turn 11 after damaging the car the previous chicane.

Championship contender Craig Lowndes also had a day to forget after also succumbing to damage sustained at the chicane. A late stop to repair the splitter saw Lowndes and Steven Richards finish way down in 18th.

The round continues with second 300km race tomorrow afternoon.