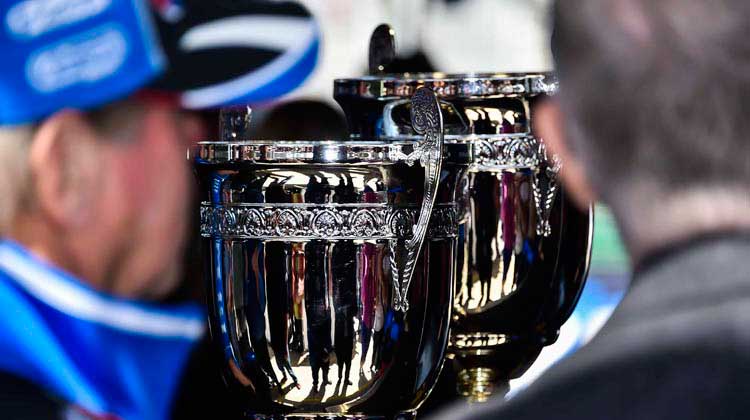 The V8 Supercars championship has been a support category at all 20 Melbourne Grand Prix’s bar one (2007), and at the Adelaide Grand Prix in the ATCC days. The entire time, it has been a non-championship round, which begs the question, “Why risk cars and cost of damage for no reward?” Below, we’ll outline some of the main arguments for and against the Albert Park races being added as part of the Championship.

Jordan Mulach and the Case for:
I’ve always wondered why the V8 support races were never included as an official part of the championship. Why would teams risk their clean, straight cars just to drive around with no reward apart from the chance of a trophy at the end of the weekend? Shouldn’t there be something up for grabs to weigh against the risks? For many years, there’s been disparity between the TV rights of the V8 Supercars and Formula One in Australia: the two have never been on the same networks for the majority of the time. Now though, with Foxtel effectively gaining control of both series in Australia, there aren’t as many problems in moving the Albert Park meeting to a points-scoring round. This means that everyone would have something to fight for or defend, instead of what is often seen as just doing some testing miles. Prodrive Racing Australia just had an amazing, clean sweep weekend in Melbourne but the only thing it can take out of it is confidence ahead of the next round. Imagine if those four wins for Mark Winterbottom and four second places for Chaz Mostert went towards their championship points haul; not to mention Shane van Gisbergen’s strong outing in the Tekno entry. On the flipside, it meant that drivers having a bad weekend, à la Scott McLaughlin, didn’t lose any ground in the championship.

Speaking of McLaughlin, few remember that his first win wasn’t actually at Pukekohe but at the support race at Albert Park in 2013. He was no less elated, and still didn’t have to wait long for his first official win, but since the weekend didn’t count towards the championship, he didn’t go in the record books as the youngest winner in V8 Supercars until a few weeks later. Similarly, in 2001, Marcos Ambrose made his debut in Melbourne (the first official round of the year wasn’t until three weeks later at Phillip Island) and stunned everyone by putting his AU Falcon on pole in his first ever outing. Again, this wasn’t officially counted, though, like McLaughlin, he didn’t have to wait long as his first official pole position came in round three.

Like any brand, the category is always looking to pitch itself to a new audience and of course corporate sponsors of which there are many at the F1, but the lack of ‘racing’ at Albert Park can’t be helping the category in this quest. With attendance at around 315,000 over the four days of the event, surely the category has a far better chance to win a new fan base with the cars fighting out for points? And on the subject of audience figures, while the F1 is broadcast around the world, is it not ironic that these ‘exhibition’ races are not?

One drawback to the round being made an official championship weekend is that the races would need to be longer as a 12-lap sprint race just doesn’t cut it. The tight GP schedule however may not let this happen, given there are many other support races and demonstrations during the weekend. I certainly wouldn’t like it if the Carrera Cup had to give up its spot for a longer V8 Supercars race and I’d cry myself to sleep if the same happened to any of the historic demonstrations! That’ll be something for the Grand Prix Corporation and V8 Supercars to work out for next year’s race. Until then, I fully support the inclusion of points for the V8 races at Albert Park and look forward to being trackside next year.

Alyce Warren and the case against:
I’m the first to admit that it would be fantastic to see the V8 Supercars run a full championship round on the streets of Albert Park, I just think there’s too many reasons why such an event would never work.

One of the biggest obstacles I see standing between the V8 Supercars becoming a championship round or staying in its current format, would have to be the Formula One schedule. It’s their event, they would have the majority say in the scheduling and V8 Supercars would have to fit in around that.

We’ve seen this previously at Abu Dhabi in 2012 when the V8’s were limited to three 12-lap championship races. Their qualifying time was also cut down with only one session deciding the grid for three races. The time that V8s are given on track already is limited and without removing another support category, I don’t believe it’s feasible to run longer races at the circuit within the time frame dictated by Formula One.

If longer races were to be scheduled, thus making the weekend into a full championship weekend, there is always the possibility of races being given a time certain finish as we saw this past weekend with races shortened due to incidents which required the field to be bought under the control of the Safety car. Regular occurrence of this at a Championship round would serve to further frustrate teams, drivers and the viewing public.

Similarly if the V8 Supercars were to expand their track time to include longer races other support categories would need to be cut down or removed from the card completely to accommodate the V8s. A move such as this, especially after the earlier controversy surrounding the scheduling of the V8 Supertest against the Bathurst 12 Hour, could be seen as bullying other categories by forcing them to give up their spot on a weekend when the world’s eyes are on Melbourne.

Damage to cars has been discussed in regards to effort vs reward and I acknowledge that this is a cost that would be incurred regardless of whether the races count for points or not but I’d like to raise the issue of cost. Teams this past weekend ran the event on a very limited supply of tyres to keep running costs lower for the event. If V8 Supercars were to run longer races the running costs incurred would increase for tyres and fuel and in the current climate where the category as a whole has been suffering from an overall decrease in revenue not only from sponsorship dollars, people physically through the gates and the previous television rights deal it doesn’t seem feasible to run a points round at Albert Park given they would receive a smaller share, if any at all, of the ticket revenue.

The F1 event also takes place just two weeks before the round in Tasmania (and just two weeks after the Clipsal 500 which left a number of teams counting the cost of the bruising season opener). Given the cars need to be in race condition well before then to be shipped across the Bass Strait, are we really likely to see the dynamic change much from what we have now? Every year we have teams fighting against the clock to repair their cars in time or having to prepare a replacement, (such as Lucas Dumbrell Motorsport which has had to lease and completely build up Tekno Autosport’s spare car after Percat’s Holden was heavily damaged in the rolling start incident at Albert Park), and unless the category changes the scheduling of the next round then it’s likely we’ll still have teams unwilling to take many risks at the Albert Park event.

Although I’m a passionate supporter of V8 Supercars (and a Melbourne resident) I can’t fully support the V8 Supercars changing the Albert Park event to a full championship round, as much as the fans may want it. There’s just too many obstacles in the way and after all, the V8 Supercars are only there to support the main attraction.

And now it’s over to you. What do you think, should the Albert Park races be included on the Championship calendar or should they remain as a non-championship round? Let us know your thoughts in the Comments section below.