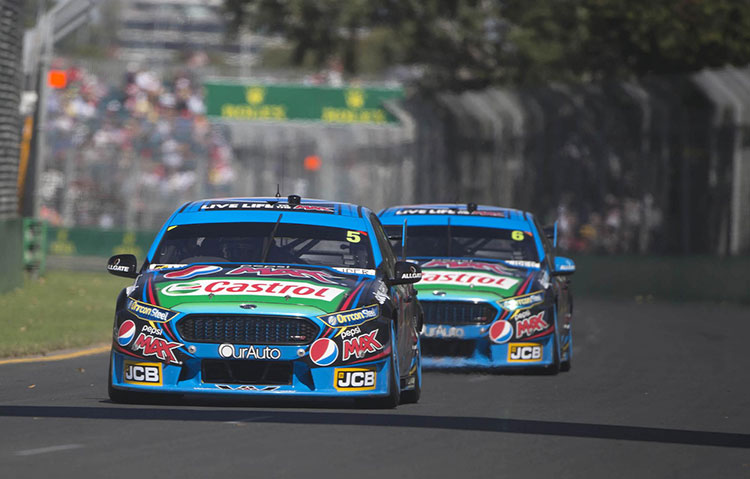 On a weekend where the V8 Supercars field play second fiddle to Formula One, it was clear that no one wanted to lift off in this non-championship round. The Albert Park round always provides the series a chance to change it up, with rolling starts, a single qualifying session and a depleted tyre bank a part of the spectacle. However, the show is less likely to be remembered for the quality of the racing than for the starting line stack ups…

A single qualifying session determined the grid for the first of the weekend’s four races, with races two and three set by the results, and Sunday’s final race decided by the combined points from the previous three races. And it was Mark Winterbottom who took the top spot just 0.03s clear of team-mate Chaz Mostert in a commanding front-row lockout for Prodrive Racing Australia, Ford’s first pole position since late 2013. Preventing the factory team from taking out all three top spots, James Courtney just edged out David Reynolds for third on the grid in the Holden Racing Team Commodore.

Kicking off with a rolling start, Winterbottom beat Mostert in to the first corner and led from the front over the 12 laps. The Ford pair comfortably cruised to the chequered flag ahead of Courtney, with Winterbottom taking a maiden win for the FG X Falcon and his first victory since June last year. The chaos started early though as the cars negotiated the first few corners. A tangle between Ash Walsh and Marcos Ambrose spun the Wurth Falcon into the path of Tim Blanchard. While Ambrose continued with minor damage and Blanchard limped back to the pits, Walsh’s stricken Erebus brought out the safety car, leaving Erebus Motorsport racing to repair the E63 for the day’s second race.

In a repeat of the opening race, Race two provided a familiar finish with Winterbottom and Mostert again finishing 1-2. This time though it was Shane van Gisbergen rounding out the podium. After muscling past Courtney at Turn 1 into third position the Tekno Autosports driver held the spot for the remainder of the race. Yet again it wasn’t long before the Safety Car was called; this time at the end of lap 1 to retrieve Dale Wood’s Holden from the Turn 7 tyre wall after contact with Scott McLaughlin. McLaughlin was later handed a 5 place grid penalty for the contact and the incident cut the race three laps short of its scheduled 12 lap distance. After racing resumed, there was no real action until the final lap when Craig Lowndes passed a struggling James Moffat on the outside of Turn 3 just as Garth Tander overtook a defensive Fabian Coulthard on the inside of the same corner. The pass forced Coulthard to run wide, taking a shortcut through Turn 4 and emerging ahead of Tander.

Winterbottom went 3 from 3 on Saturday, again dominating the race and leading Mostert home to the flag. Van Gisbergen initially got past Mostert at Turn 1, but was soon relegated to third by the end of lap four. He finished in that place, albeit 7.2 seconds behind Winterbottom. A vigorous start was perhaps the highlight of the race with the top 10 remaining in place from lap 3 to the chequered flag. McLaughlin’s race only lasted half a lap after his Volvo’s engine let go on the opening lap, leaving the Kiwi to sign autographs while waiting for a scooter. Wood was also back in the garage with an oil leak. Coulthard was pushed down the order after trying to defend from a racy Reynolds, turning in on the Bottle-O driver and ending up completing a trip through the gravel.

The final race of the weekend got off to a messy start after the fears of the consequences of a rolling start were realised. With control of the field and the choice of when to make his move once in the acceleration zone, Winterbottom opted to hold up the pack for as long as possible before accelerating. Chaos ensued behind as several overeager backmarkers attempted to pre-empt the start triggering a multi-car crash. Nick Percat and Marcos Ambrose were both out on the spot. James Moffat and Will Davison also got caught up but both soldiered on, although the damage saw Davison fail to finish. With the focus on the melee on the straight, Craig Lowndes was spun by Coulthard in a second incident at Turn 2 and into the path of Jason Bright. Both were unable to finish. With safety car deployed, the race was shortened to 11 laps. Racing resumed and the battle for the podium was on between Winterbottom and Mostert on two new tyres and chasers van Gisbergen and Courtney on completely fresh tyres. Despite pressure being applied by the Tekno and HRT drivers, it was the Prodrive combination of Winterbottom and Mostert that again finished 1-2, completing a clean sweep of the weekend and the first round win for the FG-X. It wasn’t such good news for Prodrive stable-mates David Reynolds and Andre Heimgartner. Having starting back in 15th and 18th respectively, the pair were deemed to have jumped the start contributing to the start-line chaos and both later received 10 second post-race penalties.

A clean sweep of four one-two finishes for Prodrive Racing Australia and Winterbottom the first driver to clean-sweep the event since Russell Ingall in 1998, should have been the event’s main talking point, but the story of the round was the carnage brought about by a needless attempt to improve the spectacle. With just a five-day turnaround to be ready for the next Championship race in Tasmania, it’s expected the teams will all be ready, but the exhibition race proved a costly exercise.