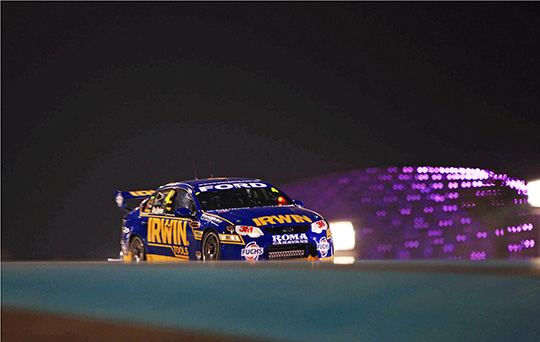 V8 Supercars return to action again this weekend, this time at the Yas Marina Circuit in Abu Dhabi.

It’s the third consecutive year, the championship has raced at the circuit, but there are a number of big differences this time around.

Having been the main act for the past two years, the V8 Supercars will run as the only support category for Sunday’s Formula 1 Etihad Airways Abu Dhabi Grand Prix, the first time ever that the two Championships have linked up outside of Australia.

It will also be the first points-paying V8 Supercars event to be held as part of a Formula 1 Grand Prix (the Albert Park races in Melbourne alongside Formula 1 are a non-championship event).

The pairing gives V8 Supercars the opportunity to race in front of a much larger crowd than seen for the 2010 and 2011 events.

It will also be the first time the V8 Supercars have raced on the full 5.5-kilometre Grand Prix length circuit after using a shortened 4.7km version (integrating a “Corkscrew” section between Turn 3 and halfway down the back straight) for the last two stand-alone visits. 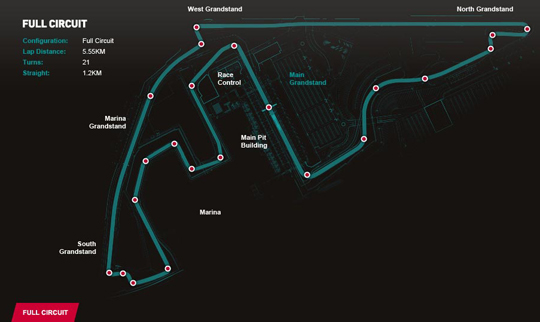 V8 Supercars had initially hoped that the two 200km race format used for the previous two events at the Yas Marina circuit would be retained, but as the support act, the V8 Supercars schedule has been condensed to just three 12-lap sprint races (65 kilometres per race) to fit around the F1 schedule.

Qualifying could certainly throw up a few surprises though with the three fastest times set by each driver determining their grid positions for each of the three races.

With only 20 minutes and a 5.5km circuit, this is likely to limit the drivers to either three lots of one-lap runs or two lots of two-lap runs. And with such a tight schedule the hope is that there won’t be any red flags!

Tyre Allocation
Each car is allocated 12 hard and 12 soft tyres to use over the weekend. The hard tyres can only be used for Saturday’s opening race, with soft tyres only in the final two races (although qualifying will also likely be done on softs).

Races
The sprint races also have the potential to create plenty of excitement as seen in the short qualifying races that determined the grid at this year’s Sandown 500. A gap of only 70-minutes between Saturday’s races will only serve to add to the action.

A maximum 300 championship points are on offer (the same as the other rounds), with 100 points up for grabs for the winner of each race.

There are no compulsory pit stops in any of the races and with no need to worry about fuel saving or tyre management, it’s down to the drivers and how hard they drive the car rather than race strategy that will determine the outcome of the race.

Tim Edwards, team principal at Ford Performance Racing put it best in a recent interview with Speedcafe.com when he said:

“With Abu Dhabi, the immediate thought is that three races of 12 laps is not a lot of racing. But I instantly think about Sandown with no tyres, no fuel and 2x20lap races where everyone just went for it and it was fantastic.”

“There is no strategy apart from ‘go.’

“A bit like the last five laps of Bathurst where we turned the screen off and said you’re on your own mate. Trim one go as hard as you bloody can.”