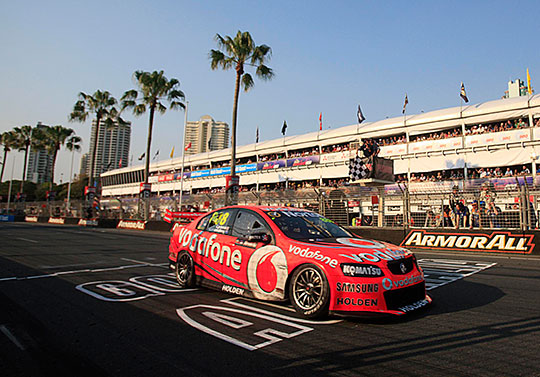 Holden’s VE Series Commodore is closing in on history and is just three victories away from becoming the first car to win 100 V8 Supercars Championship races.

Introduced at the beginning of the 2007 season, the VE/VE Series II has amassed a record 97 championship race wins to date, the most recent coming courtesy of TeamVodafone’s Jamie Whincup and Sebastien Bourdais at the Armor All Gold Coast 600.

It will reach its century if Holden wins all three races in Abu Dhabi this weekend.

At the time of its launch, Holden Motorsport Manager Simon McNamara was cautiously optimistic.

“The VE Commodore has big shoes to fill when considered alongside Holden’s motorsport classics such as the Monaro, V8 Toranas and past Commodores,” McNamara said at the time.

The model’s first win came on debut in the opening leg of the Clipsal 500 with the Holden Racing Team’s Todd Kelly claiming victory.The momentum continued from Adelaide with VE winning its first eight straight races, while Kelly secured its 25th win in the last race of the 2007 season.

Win number 50 was delivered by HRT’s Garth Tander in the second leg of the 2010 Clipsal 500, while it claimed the record for the most winning model race car with its 64th victory the following year – again in the second leg at the Clipsal 500 – with Jamie Whincup and TeamVodafone’s win on Sunday.

Its 75th victory was collected by TeamVodafone’s Craig Lowndes at Queensland Raceway in 2011.

Tander has been the most successful VE Commodore driver with 35 race wins, followed by Whincup (27) and Lowndes (13), while the track at which the VE Series has won its most races is Queensland Raceway at Ipswich (9 wins).

While its V8SC record is impressive, the VE Series Commodore has also made history at Australia’s most iconic racing circuit, Mount Panorama, Bathurst, with four straight victories (2009-12) – yet another record.

VE’s longest winning streak was 11 straight races this season, starting from Race 12 at Darwin’s Hidden Valley in June and continuing through to Race 23 at Surfers Paradise last month.

“We were extremely proud of the VE Series Commodore right from the beginning, and while optimistic we were confident it would be a success,” he said.

“It’s fair to say it has already exceeded all of our expectations and can rightfully claim its place as not just the most successful Holden race car, but perhaps the greatest Australian touring car of all time.”