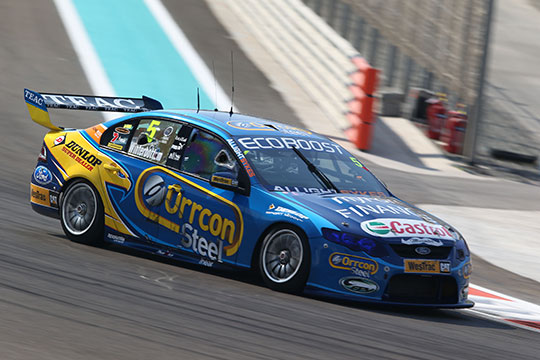 Ford Performance Racing’s Mark Winterbottom heads to the team’s home race at Winton seeking his first win at the track to keep his title hopes alive ahead of the season-finale in Sydney in two weeks. Remarkably ‘Frosty’ has never won at the track though needs to outpoint series leader Jamie Whincup at this weekend’s penultimate round to stay in the championship hunt.

Team-mate Will Davison is FPR’s form driver with a victory, three second places and three pole positions from his last four races. He has claimed eight pole positions this year and another clean sweep this weekend, like his effort in Abu Dhabi, will see him claim the year’s pole award.

David Reynolds has endured a tough run since his Bathurst heroics and wants a big finish to the year to secure his and the team’s best-ever championship result.

DRIVERS’ VIEW
Mark Winterbottom – #5 Orrcon Steel FPR Ford:
“This weekend I just have to try and win races. It is a big points gap to close but I just have to focus not on the championship, but on just trying to get the best result possible. Winton is our home test track so we know it very well and if we can win the last four races of the year it would be the best way to finish off especially with the last year with the current car. We’ve had a lot of success with these cars so it would be nice to send them off with a few wins.”

Will Davison – #6 Tradingpost FPR Ford:
“Winton is always a really tough little track as it is demanding on set-up for one lap and over a race distance it is one of the more challenging tracks. We’ve returned to some form recently after starting the year strongly. My goal now is to make sure I wrap up the pole position award for the year and score a few more wins. I am looking forward to getting to Winton as we didn’t do ourselves justice at our home track last year and since then we have been much more competitive and have had a quick car. I won there in 2008 though since then I haven’t been on the podium so it is something I want to achieve this weekend.”

David Reynolds – #55 The Bottle-O FPR Ford:
“I like going to Winton as it is basically my home track. I grew up near there and drove my first race car there and it is our test track so I know it well. By general standards the cars are fast there and every year I’ve been there FPR has been in the mix at some point so that gives me confidence. I am pretty optimistic because I’ve had two bad rounds at the last two events and I am keen to bounce back and put a positive spin on the end of the year.”

Tim Edwards – FPR Team Principal:
“Winton is the last place this year we go where we feel we have to erase the mistakes of last year and there is no reason that won’t be the case. Our team is as motivated as ever and it is a track we’ve enjoyed very beneficial testing at throughout the year so we are excited by the prospect of what we might achieve. It is our home track too so we expect great support from our loyal fan base.”

CIRCUIT: Winton Motor Raceway
LENGTH: 3.0-kilometres
Winton is FPR’s home test track and as such is well-known to the team and its drivers. Despite its remote location in rural north-eastern Victoria the track is one of the longest-serving on the calendar and combines a broad combination of corners on its relatively short layout. Fast, flowing turns sit alongside tighter turns and a hairpin to provide a true test of a car’s handling.
TRACK RECORD: 1m22.98s – Marcus Marshall (2009)
FPR BEST RESULT: 1st – Jason Bright, 2006