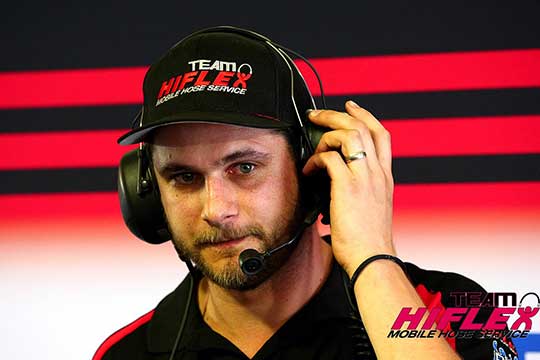 Team manager Dylan Napier and his wife Chloe are expecting the birth of their first child anytime, which will see Napier remain at his Melbourne home over the weekend.

Filling the role is long-time team member Graham Jenkins, who will return to lead the squad in the penultimate event of the championship.

Jenkins currently works for Tony D’Alberto Racing’s sponsor and business subsidiary Centaur Products. Jenkins is a known quantity to the team, having been associated with them since 2008.

Two races will be held over the weekend, with Saturday’s race to be run over 47 laps. Sunday’s race will be longer, run over 67 laps. Both days will include a 20 minute qualifying session.

Practice for the meeting begins on Friday.

“Graham is back and running the team, which is great that we have someone so experienced close to hand,” said Tony D’Alberto.

“Dylan does a really good job. He is been in his team management role since last year and, for someone so young, he has taken it on really well. He is one of the best leaders we’ve seen.

“It’s a shame that we won’t have him in the garage, but we wish him and Chloe all of the best. I’ve told them if I win this weekend, they need to name the baby Tony!

“This will be the last time we drive this specification of car at Winton. This is where we test, so the car should be good, but it’s one of those places where everyone has done a million laps.

“It will be interesting, but we’re looking forward to it. The temperature will be pretty extreme. Tyre life is going to be a big thing, and we’re back to a standard format which we haven’t seen for quite a few rounds now.

“We’re well prepared for the race so I’m looking forward to getting it underway.”

“We’re all excited that we will have a new member of the family coming into the world,” said Al D’Alberto.

“Dylan has been with our team for sometime now and he really has made his mark on our team. It’s a shame that he won’t be at our home race, but all the same, we wish him the very best for this new chapter in his life.

“Graham is a strong leader. He has the runs on the board and we’re all looking forward to a competitive weekend.”