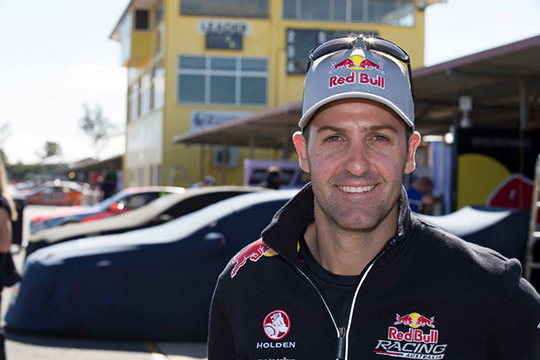 Jamie Whincup has picked up from where he left off after the Coates Hire Ipswich 360 opener to land his second pole position of the weekend at the Queensland Raceway.

In the first of two back to back qualifying sessions, Whincup (Red Bull Racing Australia) left it until the final minute to set his time, jumping clear of Scott McLaughlin (Fujitsu Racing GRM) by 0.25s with a qualifying lap record of 1:09.07s to repeat yesterday’s front row lockout.

In the early stages of the session all three Erebus Motorsport cars were sitting inside the top ten, line astern, led by Irwin Racing’s Lee Holdsworth. At the close of the session however, Tim Slade (Heavy Haulage Australia Racing) was the only Erebus driver in the top ten, sitting at the tail end in tenth position.

Following the Ipswich 360 opening race, Whincup’s teammate Craig Lowndes received a two grid spot penalty for his contact with Mark Winterbottom in Race 22. His finishing spot of thirteenth, will push him back down to fifteenth behind Pepsi Max Crew’s Mark Winterbottom, who gains a spot as a result.