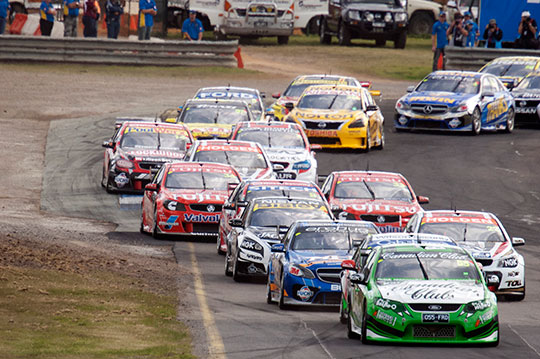 V8 Supercars has revised its race formats for 2014, with next year’s Championship set to comprise of just three different event types and refuelling at every round.

The ‘Super Sprint’ format introduced in 2013 will do away with the much debated 60/60 Saturday race and the two 100km races on Sunday, and will instead feature two 100km races on Saturday, followed by a single 200km race on the Sunday that will include pitstops for tyres and fuel. The Super Sprint format will feature at every event except the Adelaide, Townsville and Sydney street races and the endurance events.

Three rounds will form ‘Super Street’ events the Adelaide 500, the Sydney 500 and the Townsville round which will extend from 400 to 500km with each leg increasing by 50km to match the two 250km race format used at Adelaide and Sydney.

“We very much believe that the fans own the sport, so we’ve done a lot of research around our formats and how we build progress the series,” V8 Supercars CEO James Warburton told Australian broadcasters, Network 7.

“Through the Commission process we’ve simplified it to three specific formats.

“[It ensures] that every race has points attached to it and really making sure the fans know what they’re going to get every time they tune into a race.”

No comment was given on the introduction of twilight racing, but it is predicted to become a regular feature, starting with the season-ending Sydney 500 in December. An announcement is expected to coincide with the release of the 2014 V8 Supercars Championship calendar later this month.