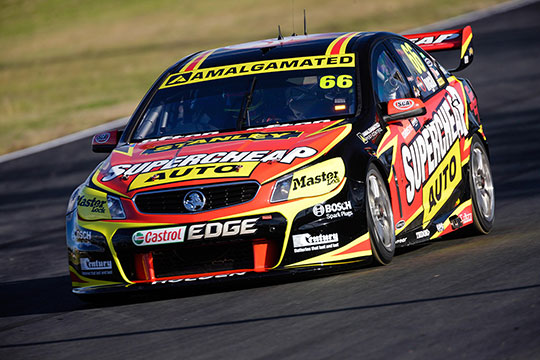 Tim Slade has signed with Walkinshaw Racing replacing the outgoing Russell Ingall in the Supercheap Auto Racing Commodore from 2014.

Confirmation of Slade’s signing comes just days after Erebus Motorsport announced Slade would be leaving the AMG Mercedes-powered outfit at the end of the year.

Walkinshaw Racing has also renewed its partnership agreement with Supercheap Auto for the 2014 season, reuniting Slade with the Australian automotive retailer, the 28-year old having raced alongside Ingall under the brand’s banner in his debut V8 Supercars season at Paul Morris Motorsports in 2009.

“To be able to join a team as successful as Walkinshaw Racing and reunite with Supercheap Auto was the perfect scenario for me when I was considering the next step in my career,” Slade said.

“Walkinshaw Racing’s achievements are second to none, and its recent results show it is coming to terms with the Car Of The Future chassis.

“It has an impressive depth of technical talent and a strong, on-going development program, everything that is required to be successful on-track.

“Supercheap Auto completed the picture; it’s a successful, national brand, part of one of the country’s top 10 and fastest growing retailers, and a long-time supporter of V8 Supercars.

“It’s a great company and its team members have a passion for racing. I enjoyed representing the brand and team before and it will be great to work with so many familiar faces again.”

“I cannot say enough about James and everything he has done for me. Not only has he been my ‘car owner’ from day one, he helped guide my career and has become a great friend,” Slade said.

“James and I discussed all the possibilities for my future throughout this process and he gave me his full support in my decision.

“By announcing my decision today, it also allows me to get on with the job and finish the year in the best possible way for James and Erebus Motorsport.”

“V8 Supercars is a results-driven business, and success requires the right people and the support of commercials partners who are as passionate about our business as we are ourselves,” Hallam said.

“We are delighted to continue our relationship with Supercheap Auto. It is a nationally recognised brand, thriving business and market leader whose team members share our passion for racing.

“Tim is a very capable and talented young driver who joins us without any airs and graces. He is understands what is required to be successful, which is hard work, commitment and his playing his part in achieving our team’s goals.

“Supercheap Auto Racing is an exciting prospect for 2014.”