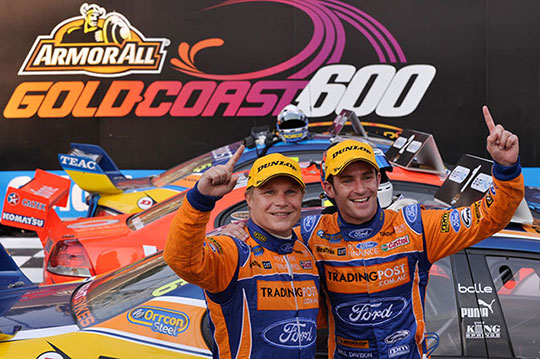 V8 Supercars has announced that it has dropped the Armor All Gold Coast 600 international co-driver format.

The compulsory Gold Coast international driver rule was introduced in 2010, with each team required to have at least one driver of international repute as a co-driver alongside its main driver in the two 300-kilometre races.

The change in regulations will also allow V8 Supercar teams to select drivers to compete across all three endurance events at Sandown, Bathurst and the Gold Coast and run the same co-driver in all three or in any combination they choose.

Previously, teams had to nominate co-drivers for Sandown and Bathurst but the rules prevented them competing on the Gold Coast.

The move comes about with the announcement that Gold Coast 600 is to be joined with the Sandown 500 and Supercheap Auto Bathurst 1000 following the introduction of the V8 Supercars Endurance Cup.

The cup is a new prize rewarding the highest accumulative points-scoring driver or driver pairing over the three endurance rounds.

In a statement on the V8 Supercars website, the V8 Supercar Commission says it “…decided on the change to allow teams to plan their endurance season across all three races and allow for a thorough preparation.”

“The Endurance Cup means that teams can choose one driver as their co-driver for all three events which allows them to train and plan for the longer stints,” V8 Supercar Commission Chairman Mark Skaife said.

“These cars are not easy to drive on a one-off basis. While the Car of the Future will be more ‘driver friendly’ it’s very difficult to transition into a race mode V8 Supercar with limited preparation.

“This way teams can spend the next eight months choosing and preparing the drivers they believe are best equipped across all three races.”