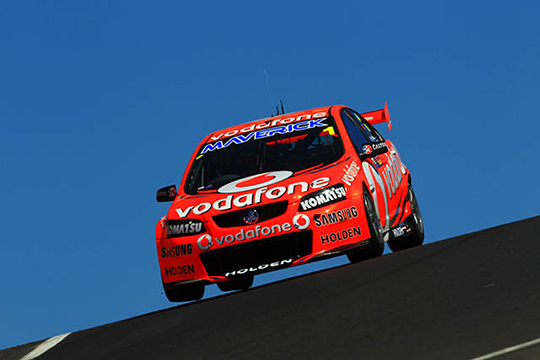 Car #1 led the way for the team early on, with Whincup setting initial pace in the opening 50-minute practice session.

His time was eventually displaced to second-fastest by Michael Caruso who went 0.15s quicker in the closing stages.

The #888 Holden cycled the driving duties between Craig Lowndes and Warren Luff in order to establish a good base feel, finishing 14th.

Luff returned fire in the second session, slated for co-drivers only.

He went quickest on his final lap, the result of a steady improvement throughout the session which was interrupted by almost 15 minutes by a red flag, brought out to recover a stricken car.

Luff’s 2:09.18s lap was around two-tenths quicker than his closest challenger, and Whincup’s co-driver Dumbrell held a watching brief in fourth.

The final 50-minute session of the day belonged to Whincup following his blistering 2:07.36s lap late in the piece.

Teams took turns at fitting new tyres in the closing stages, lighting up the timesheets, though none could come close to car #1 which ended up fastest by close to half-a-second.

Lowndes was third-fastest, and the final man to set a time still in the 2:07s bracket.

The results are a boost for the team who will return to the track tomorrow to verify setup ahead of qualifying.