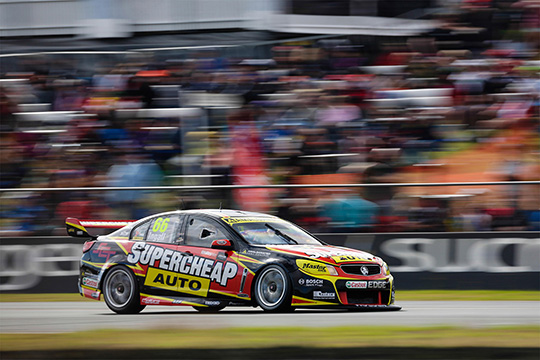 Ryan Briscoe has been confirmed as Russell Ingall’s co-driver in the Supercheap Auto Racing Commodore at this year’s V8 Supercars endurance races.

“I’ve been following the V8s all season and it’s great timing to be driving with Russell and the Supercheap Auto team; they had a great result in Townsville and are clearly coming strong before the enduros.”

Having driven with Andrew Thompson at Bathurst and Will Davison on the Gold Coast in 2010, Briscoe has driven with Garth Tander at the Surfers Paradise event for the past two years, finishing both last year’s races in the top five.

Briscoe’s V8 Supercars debut also came with Walkinshaw’s Holden Racing Team when he scored provisional pole alongside Jim Richards at the Sandown 500 in 2006 .

“My introduction to V8s was memorable – I was comfortable at Sandown straight away and I have very fond memories there,” Briscoe said.

Ingall is confident Briscoe’s experience will quickly get him up to speed.

“V8s are unique race cars and can be tricky to drive, but Ryan has shown he’s able to adapt very quickly,” Ingall said.

“Having a co-driver of his calibre in the Supercheap Auto Commodore will give us a great chance in the enduros.

“It’s especially good having Ryan on board for the Gold Coast, because has great pedigree there in both Indycars and V8s.”


Briscoe is also competing in the American Le Mans Series (ALMS) this year with Level 5 Motorsports and won the P2 class at the 12 Hours of Sebring alongside Scott Tucker and Marino Franchitti. He also made his debut in the Le Mans 24 hour, completing a total of 10 hours at the wheel.

Having fractured his right wrist in a crash at the Toronto IndyCar round in July, Briscoe is currently recovering from surgery, but is expected to return to racing with Level 5 in the next ALMS round at Road America.