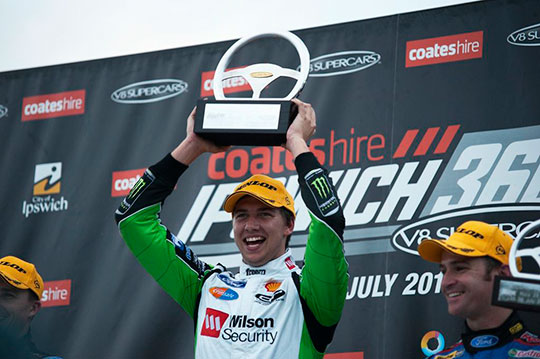 Rookie Chaz Mostert has claimed a sensational first V8 Supercars win in the final race of the Coates Hire Ipswich 360.

Unaffected by the tyre dramas that plagued the race, Mostert led from start to finish, spearheading a Ford 1-2-3-4 finish and giving Dick Johnson Racing its first win in three years.

The 21-year old started from the front row and on the drier line took the lead from pole sitter Will Davison (Pepsi Max Crew FPR).

A spate of front-left tyre failures then caused chaos during the race sending no less than five drivers into the pits for replacements and taking Scott McLaughlin out of contention while the Race 23 winner loomed in on Mostert.

With McLaughlin pushed back down the order, Mostert held a commanding lead over his nearest rival Will Davison, and though the Pepsi Max Crew FPR  driver chipped into the lead in the dying laps, Mostert was never challenged and took a comfortable win ahead of fellow Ford drivers Will Davison and Mark Winterbottom.

Mostert’s win comes in only his 15th main game race since his debut in round four at Perth and makes him the 10th different winner of the 2013 season to date.

“It is an unbelievable feeling to get the win,” said Mostert.

“I am so thankful to DJR and my engineer Adam for giving me a rocket ship this afternoon.

“At the start the clutch grabbed a bit but I got back out of it and grabbed it again and it was fine. I didn’t think I could keep the lead on the first lap, but Will was on the damp side and away we went.

I’ll pinch myself in the morning to make sure it wasn’t all a dream!”

Russell Ingall was forced to retire on the opening lap, the innocent victim of a first corner clash involving Scott Pye and Alexandre Prémat. Attempting an inside pass on Prémat, Pye collided with the Frenchman, propelling him into Ingall’s path. The resulting damage to the right front suspension of Ingall’s Supercheap Auto Racing Holden was deemed unrepairable. After pitting, Prémat was able to continue and he brought his Fujitsu Racing GRM Holden home in 26th. Investigating the contact between Pye and Prémat post-race, Stewards deducted Pye 25 points after the ekol Racing driver admitted to careless driving.

Mostert’s Wilson Security teammate Tim Blanchard was the other DNF, after smoke was seen pouring from the rear of his Falcon on lap three. Although the car was parked off track it dumped substantial amounts of oil on the track. On the subsequent lap Will Davison, Mark Winterbottom (Pepsi Max Crew FPR), Jonathon Webb (Team Tekno Darrell Lea), James Courtney (Holden Racing Team) and Lee Holdsworth (Irwin Racing) were all caught up in the fluid, running off track as they rounded turn three.

Championship leader Jamie Whincup (Red Bull Racing Australia) was forced into the pits twice after he locked up his left front tyre causing a puncture and serious damage to the front of his Commodore. He returned to the track a lap down, but a second puncture to the same tyre meant another stop on lap nineteen as they replaced the tyre and assessed the damage. Whincup was sent back on his way and eventually finished the race in twenty-fifth, three laps down.