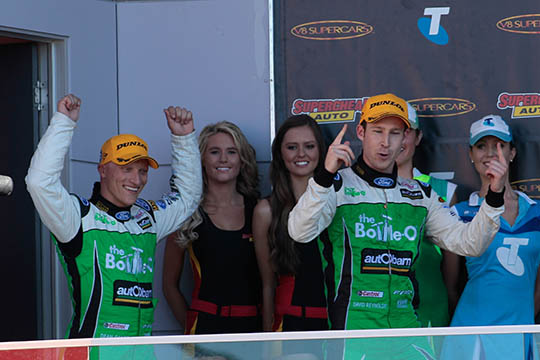 Ford Performance Racing has endured the full range of emotions at Mount Panorama with David Reynolds and Dean Canto claiming second place while title contenders Mark Winterbottom and Will Davison suffered a day to forget in what many experts are calling one of the greatest races in the event’s 50 year history.

Reynolds drove the best race of his career to finish an agonising 0.3 seconds off the win. He and Jamie Whincup battled bumper-to-bumper for the last 20 laps and despite numerous attempts, Reynolds had to settle for second.

He and Canto started eighth and moved up the order rapidly. As the race unfolded it was clear they would be in contention. They were rarely outside the top five and by the final phase of the race were racing Whincup and Paul Dumbrell for the win.

Davison led away from pole and built a healthy lead of more than six seconds until the first safety car of the race. John McIntyre then took over and remained in the lead pack, but as the race progressed their chances of victory diminished.

McIntyre pitted from the lead with a suspected tyre issue, though no problem was found. Later in his stint he ran off track due to a damaged tyre and after Davison returned to the seat he had to serve a pit lane penalty for a pit stop infringement.

McIntyre was spun around on lap 96 and then on lap 132 Davison survived a wild ride through The Chase when his suspension broke, severing his brake lines and pitching him into the gravel trap. Winterbottom and Richards had a low-key race and despite dropping four places on the opening lap, the pair used their vast experience to recover the ground.

They were never more than a few seconds away from the lead throughout all the safety car cycles and heading into the last quarter of the race were well-placed to make their push for the podium. However, on lap 139 Winterbottom was forced to pit to replace a cut tyre which dropped him to the back half of the field. He would recover to 11th but a potential podium chance went begging.

Winterbottom: “It was a frustrating day with all the tyre issues. There wasn’t much we could do though the only saving grace was the fact all but the last one fell into our pit windows. We definitely could’ve got a podium as we had the same set-up and tyre pressures as Dave and Dean and we did a few tyres and they didn’t have an issue so we are scratching our heads at the moment. We fought back to 11th so we salvaged what we could and the team performed well and we rolled with the punches. It was great to see Dave on the podium and give us something to celebrate on what has been a miserable day. Bathurst has hurt our championship but there are still four events to go.”

Richards: “The worst part of the day is the frustration that our race was determined by things a long way out of our control and that makes it hard to accept today’s result. We had the car speed to be on the podium but today we are left feeling flat. Our whole year is built around success at this one event and if you don’t win it or have a great result you are left feeling flat. It is such a physical and mental strain that it takes a few days to recover, but we all love it and will be back here next year.”

Davison: “Today was nothing short of a disaster for me. To start on pole and not even feature in the top group of cars really hurts. John and I drove the wheels of our car but a combination of things out of our control put pay to our day. My big off could’ve had terrible consequences but thankfully I got away with it. A suspension issue severed the brake line and meant I had no brake pressure at the fastest part of the track. I’ll need a miracle now to feature in the title fight but we head to the Gold Coast in a week so we don’t have time to be down on ourselves. Mika (Salo) and I went well there last year and I know we both want the win.”

McIntyre: “The first quarter of the race was when we looked the best. We both led and led comfortably but then the tyres issues came in and we now know we had an issue with the car which probably caused some of those issues but we didn’t discover it until it was too late. It is such a shame as the team has put in such a massive effort so to not really come away with much is a shame and just motivates us to come back and do it better next time.”

Reynolds: “Driving to Bathurst I had a thought that I would pass a Triple Eight car on the last lap of Bathurst and while I thought it would be (Craig) Lowndes it almost became reality today. My rear tyres were pretty shot at the end and after the last stop we were playing the conservative game and saving heaps of fuel so we could attack. By the time we were ready to fire we had used the best of the car up so I couldn’t quite make the move. Overall we had a great day and I am really proud of everyone, especially Dean. We were an unproven duo a few weeks ago but I think after this weekend we’ve proven that we make a great team. This is great for Rod (Nash) too and I’m sure we are going to enjoy a big celebration tonight.”

Canto: “The car was strong all day and I knew it was capable of a big result. In the closing laps I was like all the fans and could sit back and enjoy the finish, though to say I was nervous would be an understatement. Our engineers were asking Dave to save fuel and when Dave said a few warning lights came up I was worried but in the end we had great pace but just couldn’t quite get it done. My day was actually pretty easy as the safety cars fell in the right spot and meant I did the minimum laps I needed to do.”

Tim Edwards – Team Principal: “Bathurst once again threw up its usual amount of curve balls though to return to the podium here for the first time in a long time is rewarding for the entire team. Dave and Dean drove the perfect race and to finish just 0.3 seconds away from winning Bathurst after 1000-kilometres must be commended. The whole crew on Rod’s (Nash) car and everyone at FPR must be proud of the result. That said, Frosty and Will had a day to forget. Will was very lucky to escape what could’ve been a very serious accident so we are thankful he’s okay. Frosty and Richo were just coming into contention at the right stage of the race only for a cut tyre to end their chances at joining Dave and Dean on the podium. The drivers of cars 5 and 6 all performed well and it was only things out of their control which led to the finishes they had. The low points haul finish here has cost us dearly in the championship, though we will regroup quickly for the Gold Coast. Bathurst is the biggest challenge in our sport and our preparation for next year has already begun.”