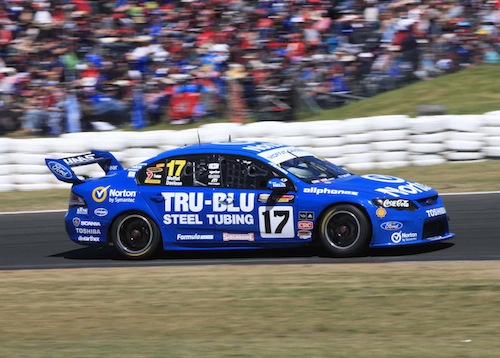 The Supercheap Auto Bathurst 1000, celebrating 50 years, came to an end yesterday, with Dick Johnson Racing scoring a Top 10 finish in the Great Race.

Overnight, James Moffat and Alex Davison’s yellow and black Team Norton DJR entry had been transformed by the team into a replica of Dick Johnson’s 1980 / 81 Tru-Blu XD Falcon.

Revealed in the garage just before the warm up session, the car inspired all the team. After the session, James Moffat described the car “as the best it has been – a rocket”, which showed in his laps times. Moffat and Davison were the 4th fastest during warm up.

The start of the race was clean for the team, with all four main series drivers starting.

The race was largely processional for the first 10 laps as all drivers settled into a rhythm.

Fiore reported an issue to the pit crew on lap 12 and was brought into the pits to check the issue. After the subsequent pit stop, Fiore’s Jim Beam Racing Falcon suffered a left front suspension failure in pit lane. The team returned him to the garage to rectify the issue. His co-driver, Matt Halliday, prepared himself for his first stint and just 9 laps down was able to return to the field.

For the rest of the 140 laps, Fiore and Halliday drove steady and bought the #12 Jim Beam Falcon home in 22nd position, the same place they had started. Despite being laps down on the leading group, the duo were setting very competitive lap times to the leaders.

The first safety car was called on lap 20 when Jonny Reid stopped at The Cutting, triggering the first safety car and a barrage of pit stops. Owen, Johnson and Moffat all came into the pits, with car #17 and #18 double stacking and competing a driver change.

With the second round of pit stops around lap 53, Steve Owen took over from Paul Morris and team used the time to complete a brake pad change. On Owen’s exit from pit lane, and his subsequent approach to turn 2, a brake issue caused the V.I.P. Petffods car to run wide and into the tyre barrier. This sadly ended Owen and Morris race.

Cars #17 and #18 of Moffat/Davison and Johnson/Simonsen had more luck throughout the 1000km classic.

The #18 Jim Beam car drove a steady race, keeping out of trouble. The car came home straight in 17th, one spot higher than the starting grid position. Finishing the 161 lap race on the lead lap is an achievement in itself.

The Team Norton DJR Tru-Blu pushed forward throughout the race with both Moffat and team mate Davison making gains on the field. Their consistent, hard fought race put them in a great position coming into the last stint, which saw them end the race in 10th. Given the tyre issues all the teams had during around the Mountain, which the Tru-Blu car also suffered from, 10th position is an exceptional result for the team.

The Dick Johnson Racing cars did not lack any straight line speed, with Johnson, Moffat and Owen being the three fastest cars down Conrod Straight with speeds of 300kmh, 298kmh and 297kmh respectively. Testament to the hard work and effort the entire crew had shown during the lead up to the event.

The team will head back to the QLD Headquarters now, to prepare the cars for the Gold Coast 600 in 10 days time.