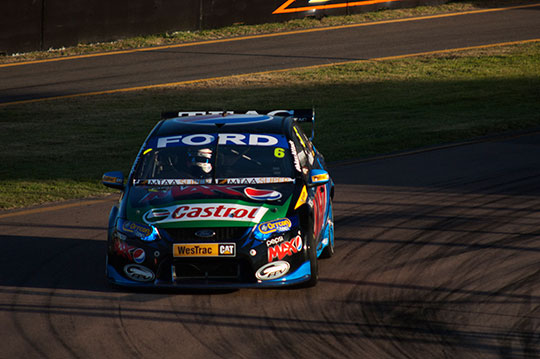 Davison chased down Craig Lowndes in the closing stages, taking the lead on lap 58 and claiming his second win of the season, and his first on the Townsville Reid Park circuit, four seconds clear of Winterbottom and Lockwood Racing’s Fabian Coulthard.

After a poor qualifying, Lowndes, starting from 12th rolled the dice, the only driver electing to start the 70-lap race on the soft tyre. The Red Bull Racing Australia driver put the grippier rubber to great effect, climbing through the field to the top spot by the ninth lap, stretching his lead out to 22 seconds before having to pit and change to the slower hard tyres on lap 33. However, a lack of speed on the harder compound relative to his soft tyre-shod rivals saw him fall into the clutches of a fast finishing Davison, and he relinquished the lead to the Pepsi Max Crew driver before Winterbottom and Fabian Coulthard also pounced. Lowndes crossed the line in fourth, closely tailed by Team BOC’s Jason Bright.

Lowndes’ team-mate, Jamie Whincup having started from sixteenth, the first time he’s started outside the top 10 this season, finally came alive on soft tyres making up nine positions to finish 7th after the compulsory pit-stop.

Pole-sitter Shane Van Gisbergen (Team Tekno VIP) looked to have the pace on Lowndes after switching to the soft compound, but earned a -penalty for a pit-lane infringement after his car was lowered from the jacks while it was still refuelling. Tekno teammate Jonathon Webb endured the same penalty after his car too was dropped before refuelling was completed and he subsequently drove off with the fuel line still attached.

It was a tough day for the Erebus Motorsport V8 team. Lee Holdsworth was in the pits early after contact in the opening laps. Broken suspension on the right front put the IRWIN Racing entry out of contention, although Holdsworth was able to return to the track later in the race, sixteen laps down on the leaders. Tim Slade (Heavy Haulage Racing Australia) had qualified in the top ten but suffered a blown water pipe just over half race distance which forced him into the garage when his engine started overheating, ending his day. Despite early damage to his SP Tools E63 AMG, Maro Engel recovered to finish 19th.

Whincup still leads the championship over Lowndes by 135 points with a haul of 1519. Will Davison sits in third 221 points adrift with Coulthard (-282) and Winterbottom (-302) rounding out the top five.

The V8 Supercars are back on track for qualifying on Sunday from 12.45 local time with the final 200km race taking place at 15.35.