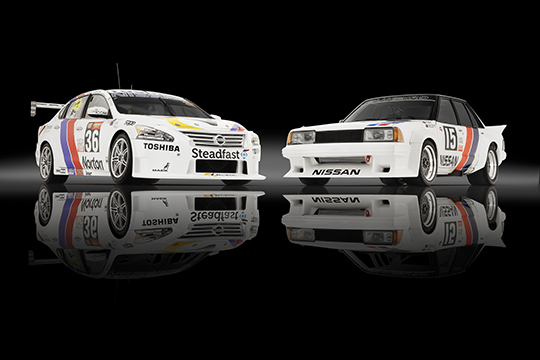 Fury’s turbo-powered entry clocked a time of 2m13.85s setting a new outright lap record in the Bathurst Top 10 Shootout, the first time a manufacturer other than Ford or General Motors had earned pole position for the Bathurst 1000.

The record-breaking lap was also the first time that a turbo-charged car had taken pole for the Bathurst 1000, and Fury’s lap time would not be beaten until 1991 – coincidentally, by another Nissan – the mighty Nissan GT-R R32.

Fury, a two-time runner-up in the Australian Touring Car Championship (1983 and 1986) recently drove the Bluebird Turbo at Winton Motor Raceway after it was restored to its former glory by race car collector Brian Henderson, with assistance from Gibson Motorsport, and the car will also be on show in a special on-track demonstration at the Bathurst 1000.

“It’s an honour to be involved in the whole project,” said the three-time Sandown 500 winner.

“I’ve always loved the Bluebird. It was one of the nicest cars to drive. That was Group C regulations, and we were restricted in various performance areas, which is why we never had a shot of winning Bathurst. But we got pole, which was good. It was a cold day and it was good for the turbo, and both the car and I got it together.

“I drove the Bluebird at Winton recently, and it was just how I remembered it. I’m looking forward to taking it back to Bathurst in October.

“It’s nice to see all of the different manufacturers back at Bathurst, and especially Nissan. It’s a company that has a long history there, and I hope to see one of them near the front at the end of the race.”

Caruso is thrilled to race in the famous ‘red and blue’ factory Nissan stripes and hopes the retro colour scheme will inspire the duo to a strong finish in the Great Race.

“In the past two years at Nissan Motorsport, we’ve done some fantastic activities, but this one tops them all. I feel extremely honoured to carry the Nissan colours from back in 1984,” said Caruso.

“Bathurst has so many great memories, and George putting the Bluebird on pole was a special moment. This is our way to celebrate that feat.

“Last year was great for Nissan to get back to Bathurst. We had our difficulties, but we had very good race pace. This year we’ll have 12 months more experience with the Altima, and we’re coming in with some good form.

“We are progressing really well and hopefully we can do something special.”