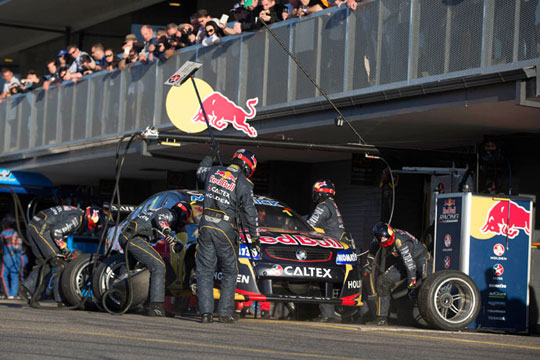 The V8 Supercars Commission has sanctioned a compulsory number of stops for the Sandown 500 and Bathurst 1000 in a move to minimise the impact of fuel economy variations throughout the field.

The rules applied at last year’s endurance races will again be in place with four mandatory pit stops at the Wilson Security Sandown 500, and seven at the Supercheap Auto Bathurst 1000. A requirement to use 550mm of fuel at the Castrol EDGE Gold Coast 600, with usage based on the measuring tube on the fuel towers has also been introduced.

A compulsory fuel drop for all non-Pirtek Enduro Cup events was introduced for 2014, but until now no fuel parity measures for the endurance races had been in place.

By mandating compulsory pitstops, the V8 Supercars Commission believes this will reduce the disadvantage faced by those teams with a higher consumption of fuel across the Pirtek Enduro Cup event.

“The technical department assessed the available data and determined a variation in fuel usage of as much as 13 per cent from the best to worst at some circuits, so V8 Supercars endorsed the request made by the teams and the compulsory pit stops have been mandated by the Commission,” confirmed V8 Supercars sports and operations director Damien White.