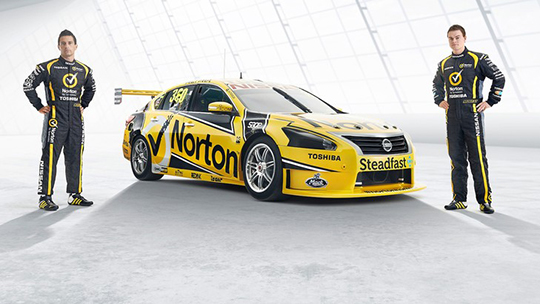 Nissan Motorsport has released the first image of its 2014-specification Nissan Altima ahead of the official V8 Supercars pre-season test day this weekend.

Nissan were given permission to rehomolgate its aero kit during the off-season after high drag levels were blamed for the Altima’s poor straightline speed in 2013.

Moffat claimed his and the Nissan Altima’s first V8 Supercars win when he led home team-mate Caruso to a one-two finish in the opening 60/60 sprint race at Winton last August.

“We had a number of highlights last year, and there were some tough times too, but we have put that behind us and we’re looking forward to the 2014 season,” Moffat said.

“Motor racing is a ‘must deliver’ business, but more so for Nissan Motorsport this year. In this industry, nothing speaks stronger than results, and that’s what we are here to achieve this year.

“It’s difficult to have any expectations before the season starts, as we’ll be heading into the new year with a new package.

Until we hit the track for the first time at the Sydney test, we won’t be getting too carried away with expectations.

Hopefully it will be an improvement, and I’m sure it will be, so all we can do is head to the test, put our best foot forward and have a productive day.”

The Test Day is crucial for the teams, hoping to bank valuable data before the first race meeting of the year, the Clipsal 500 in Adelaide.

“The re-homologated aerodynamics package should help us and that makes the opening test at Sydney very important,” Caruso added.

“It’s actually even more important for me, because due to some factors, I didn’t do the pre-season test last year. Given we’re racing there later in the year, it’s an ideal chance to log some miles around the track.

“For Nissan Motorsport and the two Norton Altimas, it’s important that we show strong improvement in our second year, and it’s critical that we start to win races.

“Whether that happens straight away, I’m not sure, but as more upgrades come through, then all the signs are there that we can start challenging on a week-to-week basis.

“As a driver, you aspire to be in a position to head to every race track with a realistic chance of winning, and I feel that we’re not far away from being in that place.”

The Jack Daniel’s Racing livery is expected to be released on Wednesday.