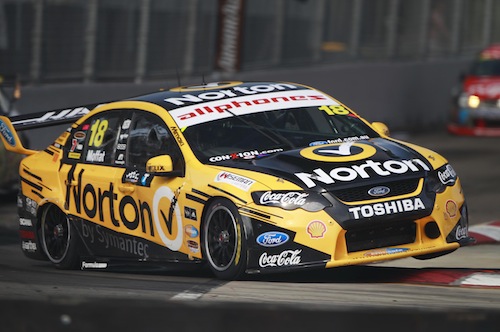 The warm temperatures the V8 Supercar field had experienced during Friday practice continued this morning, as the team headed out onto the Sydney street circuit for the Sydney Telstra 500.

Steamy rain had been falling for about an hour before the start of qualifying. Beginning the session on the Dunlop wet tyre, the Dick Johnson Racing squad were immediately fast, spending the majority of the first 15 minutes in and out of the top 10.

As the track dried out and the entire field returned to the pits to swap to Dunlop hard tyres, the times began to fall steadily, with Fiore leading the team in the top 10. With 2 minutes to go, the Jim Beam car of Steve Johnson and the V.I.P. Petfoods car of Steve Owen were the only DJR representatives in the top 10.

A gripping final few laps, where the lead changed a dozen times, saw both James Moffat’s Team Norton DJR Falcon and Johnson sit at the top of the timing board.

When the checkered flag fell, both Moffat and Johnson had secured themselves positions in the top 10 shootout. The Team Norton DJR crew had their work cut out, after Moffat touched the wall on his final lap, bending the damper, the upright and putting a dent in the differential.

Fiore’s Falcon was unlucky not to make the 10, after Holdsworth slid across the track and blocked the Jim Beam car on his final and fastest lap. “The car felt great, we had speed and I was just unlucky on that last lap,” said Fiore after qualifying about his 20th place start.

Owen also had issues with traffic and could not improve on his earlier time, and would start race 29 from 23rd.

Moffat and Johnson lined up a few hours later for the Top Ten Shootout. After the sprint lap, Moffat would start from ninth and Johnson from a season best of third. The highest spot for both Steve and the team for 2012.

The temperature continued to rise, hitting just over 36 degrees before the penultimate race of 2012 began.

A clean start by all 4 Dick Johnson Racing cars saw them move up the field, with Owen and Fiore up five spots each and Moffat up one. The team chose not to pit on the first, early safety car and when the race was restarted on Lap 5, Johnson noticed a problem.

“You can always say you had a strong car when you only get 5 laps into the race and you start up the front, but we legitimately had a car that was as good as Tim Slade’s today. That was the biggest disappointment. I was sitting behind those guys, knowing it was going to be a long hot race, conserving fuel but my tyres weren’t up to temperature or pressure so it was feeling a bit wobbly.

“We’d a bit of a battery issue at the start of the race and we didn’t know if it was the alternator. The electrical gremlins which have affected Moff, seemed to have found us, causing the alternator to fail and the battery not to charge. So just when the car was just starting to come good, it basically shut down to nothing and our race was over,” said a disappointed Johnson.

Nathan McColl, engineer of the #12 Jim Beam Racing car said on Fiore’s 15th place finish: “We gambled on the first safety car and then we did a bit of fuel saving at the end. Dean did a good job, but we played it safe at the end and came in for a splash of fuel to finish the race. A few people were pretty close at the end there too. We have a few things to work on for tomorrow and will come out firing and put on a good show for the last race of the season.”

“It’s the nature of street racing that there is always going to be stories of happy and tails of woe. We managed to salvage a top ten today – fantastic for Norton and DJR,” said engineer, Ian Walburn.

“Early on the car had a lot of under steer, but we just kept working on it during the pit stops and got #18 to be not a bad race car. James had a little on-track incident that bent the steering, which held us back a bit at the end. But a Top 10 is good. We are happy with that and tomorrow is another day,” Walburn concluded.

Steve Owen was unlucky not to secure his fifth Top 10 finish of the year, finishing in 13th. Blake Smith, engineer, car #49, said: “We showed good speed today and were able to get ourselves into a good position. Unfortunately, we had an altercation with a teammate, which can happen in this sport.

“Towards the end we also had some pump failures and the way it is in this game, if you stay still you go backwards. The failure cost us a few positions, as we were on for a Top 10 and even a Top 4 at one stage. It was unfortunate, but at least we’ve matched the good speed that we’ve seen on other street circuits this year, and we’ll come out swinging tomorrow and try again.”

The Team will return to the Sydney street circuit tomorrow morning, amidst cooler conditions, for final qualifying session and race of the 2012 International V8 Supercar Series.