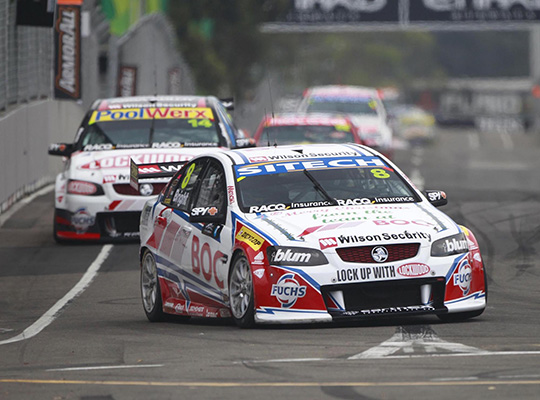 Sixty+ degree cabin temperatures saw some crazy driving at the Sydney Telstra 500 today and Jason Bright says he was one of those making mistakes.

The Team BOC driver got off to a good start, maintaining his qualifying position of 11th on lap one despite Jamie Whincup and James Courtney dive-bombing him, five abreast, around Turn One and Shane Van Gisbergen grinding to a halt in front of him moments later.

By lap 30 he was running fifth, pressuring Alexandre Premat but unable to make the pass. When Premat ran wide on lap 41 Bright pounced but, unfortunately, out-braked himself.

The pair bashed panels for several corners before Brighty ran into the tyre barrier at Turn Eight. He restarted but, unfortunately, the impact dislodged the safety cut-off switch on Team BOC’s bonnet, meaning the car rolled to a stop at Turn One of the following lap.

Jason Bright
Team BOC
“It was turning into a fuel economy race and Premat was slowing down. I saw an opportunity to pass him but I hit the curb. I got another chance at Turn Eight but I locked up and ended in the tyre bundle. I totally blame myself for the mistake.

“In qualifying we were just unlucky. Every lap we popped up into the top three but on our last lap Holdsworth was stuck on a curb and it cost a fair few guys the opportunity to get one last shot.

“It sure was hot out there today, especially since our cool suit was barely working. I’m not sure if Premat’s helmet or cool suit failed but I hope he’s OK and we’ll see him back racing tomorrow.” [Premat retired suffering from heat exhaustion]