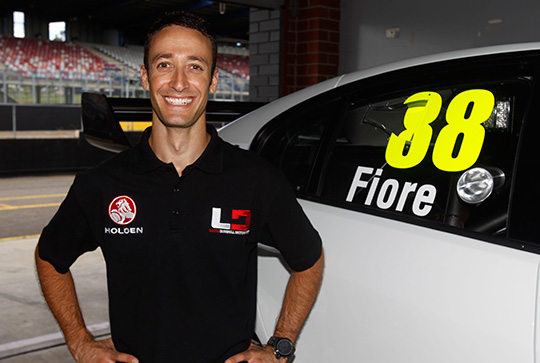 Fiore, who recently leased his own Racing Entitlements Contract to Dick Johnson Racing for this year, will partner rookie Scott Pye in the recently expanded two-car Holden team.

“I am really excited to be part of Lucas Dumbrell Motorsport and happy to be here and ready for my fifth fulltime season in V8 Supercars,” Fiore said.

“Lucas has a solid vision for the direction of the team and has established a close link with Triple Eight Race Engineering.

“Scott [Pye] is a part of the Triple Eight family, so the ties are strong.

“My initial experiences of the car during Saturday’s test were extremely positive, so I’m very encouraged about the season ahead.”

“The opportunity to work with ‘Cauchi’ is also exciting; he spent eight years at Triple Eight and he’s worked closely with both Craig [Lowndes] and Jamie [Whincup]. He’s got Triple Eight’s winning tradition installed in him, so he’s going to be an invaluable asset to our team,” Fiore added.

Dumbrell said he was delighted to have Fiore join his team as it heads into its fourth season.

“Dean is a high-calibre driver who has proven his versatility in a variety of race cars, not just V8 Supercars,” Dumbrell said.

“His experience will enable him to make a smooth transition to the Car Of The Future chassis, while I believe LDM is providing him with the opportunity he deserves – leading equipment and an enthusiastic team on the rise.”

Fiore’s appointment leaves just one seat still to be filled for 2013, with Dick Johnson Racing yet to announce who will drive the #17 Falcon.