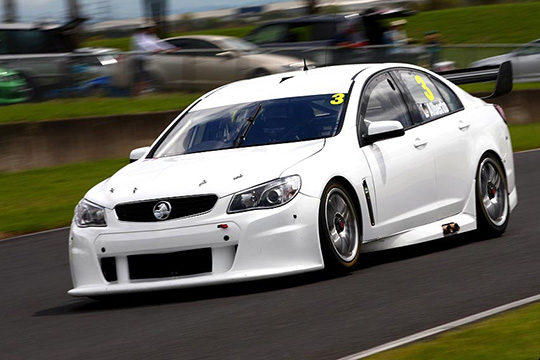 While the results might not have threatened the top of the time sheets, the Tony D’Alberto Racing team was pleased with the outcome of Saturday’s Official V8 Supercars Pre-Season Test Day at Sydney Motorsport Park.

Having finished the morning session in 16th and the afternoon session in 20th, Tony D’Alberto ended the day 23rd overall.

Clocking plenty of laps around the Eastern Creek circuit, the team successfully ran through its testing program collecting plenty of data, ahead of a final test on Tuesday. Acknowledging the team still have a lot to learn about the new generation car, the #3 Holden Commodore driver was nevertheless satisfied with the progress made.

“It’s difficult to tell how we sit in relation to others, but on a positive side, we had no mechanical dramas. The car ran strong all day, and that allowed us to ran through our program,” said Tony D’Alberto.

“The car felt quite good, but we have a long way to go to really know what makes these cars tick. It’s easy to forget sometimes that they are brand-new cars.

“On the whole, I think it was a fantastic day for the sport, with two new manufacturers joining the championship, new sponsors and the circuit’s lap record was broken.

“We have another test day on Tuesday to build up towards Clipsal and I feel that is going to put us in a strong position.”

Team Owner, Al D’Alberto believes the data collected will put them in a strong position going into the first round at Adelaide in two weeks’ time.

“It was a good day for the team, and we’re pleased with the information we’ve gathered across the day,” Al D’Alberto said.

“Of course, there’s a few things that need to be sorted out, but it’s a new car, it’s a new era, so we’ll work through it and I’m confident that we’ll come out at the Clipsal 500 with a competitive package.”

After running an all-white livery at the test, the team plan to reveal its sponsorship plans and full season package this week.