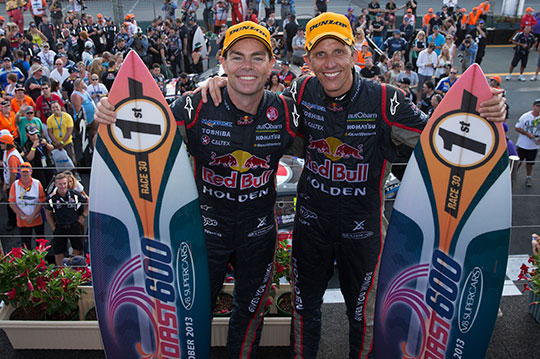 Craig Lowndes has taken a commanding victory and the Championship lead in a wild opening race at the Gold Coast 600.

Shane van Gisbergen and Jeroen Bleekemolen had been leading into the closing stages, but Lowndes got the jump with a quicker final fuel stop, pulling clear to win his first race on the Surfers Paradise street circuit since 2005 and moving 36 points ahead of Whincup with five races of the season left.

Starting from 25th after a crash in qualifying, Whincup could only watch on as co-driver Paul Dumbrell ran into the rear of Greg Murphy’s Holden Racing Team Commodore through the turn seven/eight complex early in the race. The heavy contact put Murphy into the wall and out of the race. After an extended pit stop for Dumbrell, a mechanical malfunction then stopped the car in its tracks ending the day prematurely for the defending V8 Supercars champion as well. The incident between Dumbrell and Murphy will be investigated post-race.

Completing the podium, Mark Winterbottom and co-driver Steven Richards had to overcome a mechanical black flag for a loose passenger-side window, a brush with the tyre barriers and a late attack from Tony D’Alberto in the closing stages to substantially close the championship points gap on his Holden rivals.

It was a case of the last cars left standing at the end of the race with only five cars finishing on the lead lap. Ingall rounded out the top five, while Will Davison (Pepsi Max Crew FPR), David Wall (Wilson Security Racing), David Reynolds (The Bottle-O FPR Ford), Chaz Mostert (Wilson Security Racing) and Jonathon Webb (Team Tekno Darrell Lea) completed the top ten.

The first hints of unreliability in the 2013 generation cars came on lap twelve when Scott McLaughlin’s Fujitsu Commodore stopped on track, and required a complete systems reset to get it underway.

The Safety car made the first of four appearances on lap thirteen after McLaughlin’s car found itself stranded. A number of teams opted to pit with the Safety car, and some drivers were forced to stack, most notably Greg Murphy (Holden Racing Team) and Russell Ingall (Supercheap Auto Racing) in the Walkinshaw Garages. The race restarted on lap sixteen.

A second safety car was called while the Whincup and Dumbrell’s Red Bull Holden was removed from the track, and the race restarted on lap twenty-seven.

Less than twenty laps later the field was back under the control of the Safety car after the earlier issue with McLaughlin’s resurfaced with Jack Perkins behind the wheel on lap forty-one causing it to stop on track. The car eventually re-joined the race but finished down the order.

Steve Johnson in the SP Tools Racing Mercedes was forced into the pits under Safety car with a broken rear damper. The team were able to repair the damage and they were able to re-join the race, a number of laps down. Three laps later the field was released.

Brothers Will and Alex Davison, were then involved in contact at turn four on lap 54, when Will tried to sneak up in the inside, consequently spinning Alex. Both cars were left stranded awkwardly at the apex of the corner, neither able to get their cars into reverse. Will eventually shifted his car and came home sixth, but Alex remained stationary and the Safety car was called yet again while his car got underway. The incident between the siblings is being investigated post-race.

Having been in strong contention, Garth Tander was left stranded in the pits under the Safety car when his car failed to start after processing through its stop. The car did eventually start under its own power, but dropped off the lead lap as the field circulated past. Tander and co-driver Nick Percat recovered to finish eighth.

The final restart came on lap fifty-eight and bought with it more drama. Alexandre Prémat (Fujitsu Racing GRM) spun David Russell in the Jack Daniel’s Racing Nissan at turn four on the restart and was promptly issued with a Pit Lane Penalty.

Michael Caruso and Daniel Gaunt (Norton Hornets) ended the day in the garage on lap sixty-two after breaking a left front upright with the raised kerbs believed to be the cause of the damage.

The Lockwood racer of Fabian Coulthard and Luke Youlden suffered broken right front suspension after Coulthard clobbered the kerbs on lap eighty-four. The car became airborne briefly with the front of the car buckling as it landed back on track. Coulthard was able to steer the three-wheeled Commodore back into the pits where the team frantically worked to try and get the car back on track to salvage some Championship points, but to no avail.

After a lap three incident involving team-mate Karl Reindler that almost saw the Jack Daniel’s Racing Nissan tipped into a 360 degree spin, Norton Hornets James Moffat and Taz Douglas were the last victims of the Gold Coast circuit when mechanical issues brought the car to a halt on lap 99. Smoke was seen billowing from the car prior and Moffat reported oil pressure issues as the Altima was parked up one of the escape roads out of harm’s way.

Lowndes now sits in top spot in the championship on 2459 points, while Whincup is 36 points back after his DNF. Winterbottom is in third, 49 points off the lead, with team-mate Will Davison 115 points adrift and Van Gisbergen jumping to fifth 407 points from Lowndes.

In the Pirtek Endurance Cup standings Lowndes and Luff are leading on 684 points with Mark Winterbottom and Steven Richards 51 points behind. Whincup and Dumbrell sit 81 points off the lead, with Davison and Owen 132 points back and Scott McLaughlin and Jack Perkins completing the top five, 185 behind the leaders.

Qualifying for the second GC600 race (Race 31 of the Championship) is on Sunday at 1055 local time.