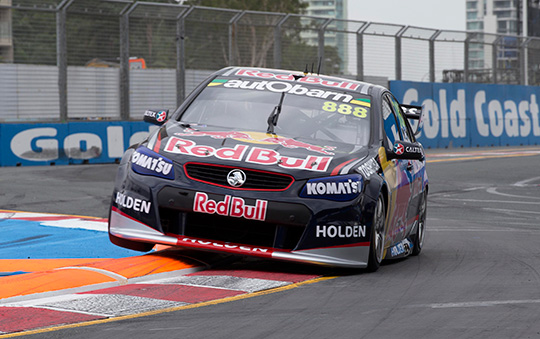 Red Bull Racing Australia’s Craig Lowndes has claimed pole position for the first leg of the Armor All Gold Coast 600.

Lowndes finished second in open qualifying but came out firing in the shootout as the only driver into the 1.10s barrier.

In open qualifying Holden Racing Team’s Garth Tander claimed provisional pole in the dying seconds of the 30-minute qualifying session, knocking Craig Lowndes from top spot. However it was Lowndes’ teammate Jamie Whincup who stole the spotlight, causing a red flag with a little over 13 minutes on the clock. Having just set the second fastest time of the session, Whincup collided with the wall on the exit of turn two, losing a left rear door skin and a front window in the process. Stewards called a red flag to clean up the resulting debris and Whincup was subsequently penalised with a loss of his fastest time and despite some confusion took no further part in the session.

Bathurst 1000 champion Mark Winterbottom endured a horror start to the session, carrying over damage the wishbone assembly from yesterday’s final practice session. He spent much of the 30 minutes in the garage, returning to the track at the end of the session to qualify in fourteenth. Pepsi Max teammate Will Davison didn’t fare much better after he was turned by Lowndes early in the session and finished in 21st. The incident is under investigation by the stewards.

Nissan Motorsport were the surprise of the session, with two out of four cars qualifying for the top ten shootout. Michael Caruso (Norton Hornets) qualified eighth and Rick Kelly (Jack Daniels Racing) finished the first leg in sixth position.

Following yesterday’s crash in Practice yesterday with Andrew Jones at the wheel, the Team BOC Commodore took no part in qualifying today. The extensive repairs were carried out offsite overnight with the view to getting the car onto the track for this afternoon’s race.

The top ten shootout provided its usual drama, with three of the seven drivers being excluded from the session.

Caruso was the first excluded, despite finishing his lap, he was determined to have exceeded the track limits through the turn one/two complex with all four wheels over the white lines and had his time deleted.

Fabian Coulthard (Lockwood Racing) finished the shootout in sixth but had his time deleted after he failed to stop at the weigh scales post lap.

Shane Van Gisbergen (Team Tekno VIP) failed to complete his lap after sliding sideways through turn one and kerb hopping across turn two, the front splitter damaged as it collided with the kerbing.