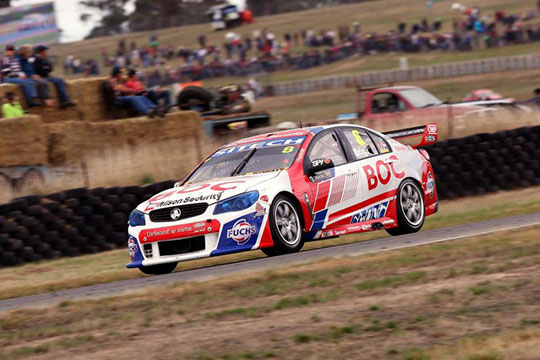 The Team BOC driver led the 42-lap race from pole to finish to take the honours, beating home Garth Tander by 3.5s.

The win makes Bright the fourth different winner from the four Championship races this season.

“It’s been too long again,” Bright said. “I seem to be putting long breaks in between my wins.

“But the car has come out of the box strong and hopefully it will continue for the rest of the year.”

It was an all Brad Jones Racing lock out at the front of the grid, but Holden Racing Team’s Tander split the pair, moving ahead of race one winner Fabian Coulthard at the Turn 4 hairpin on the opening lap after Bright picked neutral and held the sister car up momentarily.

Jamie Whincup finished in fourth after piling the pressure on Coulthard late in the race, while Pepsi Max Crew team-mates Will Davison and Mark Winterbottom took fifth and sixth respectively.

Moments earlier, Winterbottom battled with Scott McLaughlin, taking the Fujitsu Racing GRM driver down the back straight, before the rookie ducked back underneath at Turn 6. Winterbottom then made it stick a lap later, with James Courtney diving through to seventh, while Dean Fiore pulled off a similar move on Craig Lowndes to take ninth.

There was early drama when David Reynolds’ Falcon was pushed onto the guard rail at Turn 4 on lap two, after Reynolds, David Wall and Michael Caruso ran three-wide at the exit of the hairpin. With no where to go, the Bottle-O Racing Falcon rode up the fence, ripping the front-suspension from the car and bringing out the Safety Car.