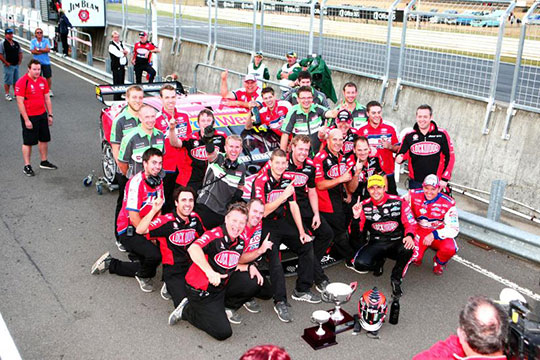 Fabian Coulthard has made it three from three for Brad Jones Racing winning the final race of the Tasmania Microsoft 365.

Coulthard snatched victory from polesitter Mark Winterbottom, capitalising on a late Safety Car restart and swooping through at the Turn 4 hairpin with just three laps remaining.

“I’m pretty ecstatic,” said Coulthard. “I may not look it but it’s been a very emotional weekend.

“It’s awesome to get two race wins and then go to my home event full of confidence.

“It would mean a great deal for me to win there. I don’t think you can put words on it, especially with the JR trophy now.

“The guys in Albury have given us a car we can fight with. It’s been a great effort from the boys.

“I didn’t think I would be finishing seventh in the points when I got here this weekend but our expectations changed very quickly. To be leaving seventh is pretty awesome. Hopefully it’s a lucky seven.”

Contact with the Lockwood Racing Holden at the hairpin caused a slow leak to the front-left tyre of Winterbottom’s Ford, before it finally let go in the closing stages of the lap, but the Pepsi Max Crew driver held on to second ahead of James Courtney, who scored his first podium of the year after jumping Jamie Whincup off the line.

Race two winner, Jason Bright took fourth from Whincup going round the outside of the Red Bull Racing Australia Holden at the hairpin on the final lap.

Will Davison, Jonathon Webb, Scott McLaughlin and Garth Tander rounded out the top 10.

The Safety Car was deployed with ten laps to run, when Scott Pye’s ekol Racing Holden suffered brake failure and ploughed head on into the Turn 2 exit wall. The impact launched the car into the air and destroyed the front end, but Pye emerged unscathed. Given the damage to the car, it’s thought that Pye will not be involved in next week’s ITM400 event in New Zealand.

The ITM400 Auckland takes place on 12-14 April at the Pukekohe Park Raceway.

UPDATE: Following the race, James Moffat and Alex Davison have both been handed 15 point penalty deductions , each for separate incidents.

Before the race, Dean Fiore was given a five-place grid penalty after he spun Alexandre Prémat during qualifying.