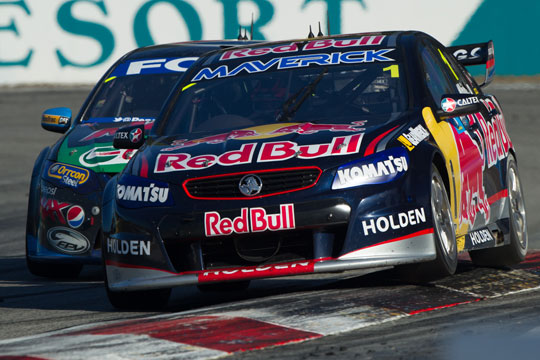 Jamie Whincup has extended his V8 Supercars championship lead with victory in the second race of the Chill Perth 360 at Barbagallo Raceway.

Whincup started from fifth on the grid but an early pit-stop proved critical as he got the jump on leaders Will Davison and Fabian Coulthard. The Red Bull Racing Australia driver then kept the fast-closing Jason Bright at bay to take his second win of the year.

Bright had qualified his Team BOC Commodore pole, but a poor start dropped him to fourth, as Davison, Coulthard and Whincup led the field away.

Pitting five laps later than Whincup, Bright made his fresher tyre advantage count in the second stint of the 100 km race, passing James Courtney (Holden racing Team), Davison (Pepsi Max Crew FPR) and Coulthard (Lockwood Racing) over 10 laps. He then squeezed out Mark Winterbottom (Pepsi Max Crew FPR), who had also gained by pitting with Whincup, taking second after the pair swapped paint three laps from the end. The Team BOC then set off after Whincup, but fell just 0.75s short.

After his record-breaking win in Saturday’s race, Craig Lowndes could only manage eighth, after being pushed wide at the start and losing five stops before losing ground with a slow pitstop. Alex Davison (Jeld-Wen FPR) and James Moffat (Nissan 360 Racing) rounded out the top ten.

An early safety car on the second lap to clear Lee Holdsworth’s IRWIN Racing Mercedes from the sand trap at Turn six gave the soft tyres a bit of respite on the hard-wearing 2.42km circuit, but only Dean Fiore, Alexandre Prémat and Scott Pye chose not to stop. Fiore held on at the front until just seven laps from the end, before falling to 13th, while Prémat and Pye were 19th and 27th respectively.