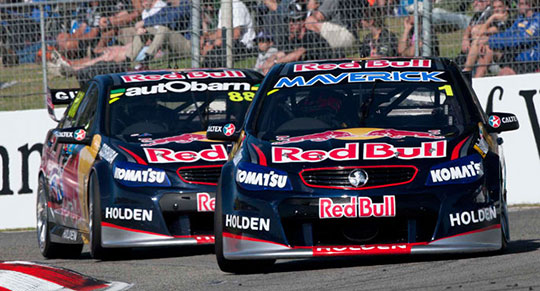 Jamie Whincup has landed his second pole of the weekend, taking top honours in qualifying for race 12 at the Chill Perth 360 ahead of Red Bull Racing Australia team-mate Craig Lowndes.

Starting only ten minutes after the first session, qualifying for race three was also held over fifteen minutes.

The Ford Performance Racing cars continued their form from the earlier session holding the top three spots with ten minutes remaining on the clock. Mark Winterbottom (Pepsi Max FPR) was sitting in provisional pole with a time of 55.3093 ahead of David Reynolds and Alex Davison. Also featuring in the top ten was Erebus Motorsports Tim Slade (Heavy Haulage Australia).

Craig Lowndes leapt to the top with a time of 55.2492 displacing the Ford driver with a time that would hold until the dying minutes. Rookie Maro Engel (SP Tools Racing) found himself once again in the top ten, with the Erebus Motorsport cars showing great improvement following engine upgrades between race meetings.

With only a minute remaining in the session Jamie Whincup lowered the benchmark, snatching Pole position from team-mate Lowndes, who was out of the car and in the garage. Whincup’s time of 55.2455 would stand despite a number of challenges being mounted, gifting him his second pole position of the weekend. Yesterday’s hard luck story of David Wall (Wilson Security Racing) made amends qualifying in tenth position.