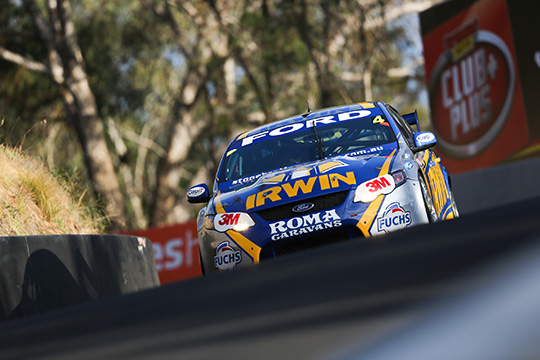 The IRWIN Racing crew used a clever strategy of speed and conservation to move up the order as the 1000km classic had its usual multiple twists and turns.

Starting 15th Holdsworth held position over the opening stint before handing over to Craig Baird for a double shift at the wheel. On lap #55 Baird took the lead in the race after the crew decided to keep him on track during one of the safety car periods. The decision to stay out would prove pivotal later in the race.

Safety Car periods didn’t seem to help the IRWIN Racing team, as on two occasions the car had to wait for service behind team-mates Shane van Gisbergen and Luke Youlden.

Then when the final 40 laps ran without interruption, things started to come to Holdsworth and Baird.

While plenty of other crews had issues with tyres, the IRWIN Racing Ford looked after its rubber, and this allowed Holdsworth to put the peddle down over the final third of the race.

As others either eased right off, or had to make an extra stop, Holdsworth was able to drive through to be inside the top-10 at the finish.

The race was won by Jamie Whincup and Paul Dumbrell who held off David Reynolds and Dean Canto in a classic finish.

What the drivers had to say:

“Really happy to come home in eighth and Bairdo did an awesome job,” said Holdsworth.

“We had a really strong car for that final stint and were able to come through.

“Of course I wanted to win the race, but you have to reassess your goals throughout the day and to come from 20th to eighth is a true testament to the team.

“There’s always next year, but eighth is a good result.

“I pushed on the best I could,” said Baird.

“It was one of those races I couldn’t really read how we were going.

“I would jump out of the car and think we were trucking along pretty good, but then see us down the order.

“We then worked back into the top-10, then fall back down. So it was a long old day and eighth is a pretty good result considering everything.”