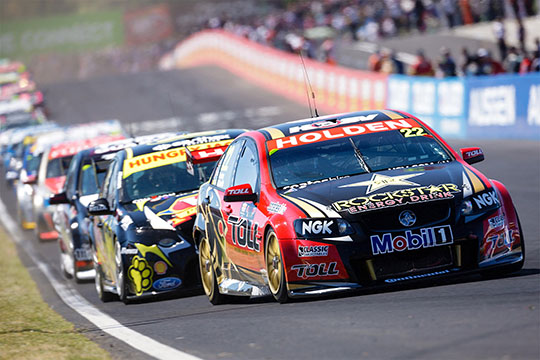 The Holden Racing Team’s James Courtney and Cam McConville have finished in fourth place at the conclusion of 161 gruelling laps around the famous Mount Panorama circuit for the Supercheap Auto Bathurst 1000.

After starting from 14th, Courtney made a good start and gained valuable track position during the opening stint of the 1000km race.

When McConville took over, he also circulated with good pace and pushed the #22 HRT Commodore well into the top 10 and in reach of the race leaders.

Courtney emerged after the shuffle of the last stop in fourth place. Determined to challenge for the race win, he first passed Michael Caruso and then made a great move on Ford Performance Racing’s David Reynolds for second – he clocked one of the fastest lap times for the race in the process.

With under 20 laps remaining, Courtney struggled to maintain the speed required to lead the race. As the left rear Dunlop control tyre delaminated, the 2010 V8 Supercar Champion became vulnerable to a rejuvenated Reynolds and was later passed by a fast-finishing Lowndes to be nudged out of a much deserved podium place.

On the other side of the garage, teammates Garth Tander and Nick Percat had a day they would rather forget.

Tander started well and found himself within the lead pack during his first stint. Car #2 pitted at the first scheduled stop and Percat took over. Shortly after taking control, Percat reported a vibration from the rear of the car and very quickly found himself in the wall at the top of the Mountain.

Percat limped back to the pits where the crew assessed the damage, rebuilt the right front of the car and soon after discovered a rear end issue. Despite the committed efforts by the crew to get Car #2 back on track, unfortunately it was race over for the Tander / Percat entry who circulated until race end to bring home valuable championship points for the team.

The Holden Racing Team will now head back to their Clayton based workshop where they will commence preparations for the Armor All Gold Coast 600 from 19-21 October.

“We had a good car throughout the whole day and with 20-laps to go I thought we were on for a win.

“Unfortunately, we had a tyre delaminate towards the end and I had to nurse the car over the last 14 laps.

“While it’s disappointing not to have claimed a podium, I’m really happy with the way that Cam and I tackled the race and it was a great team effort from everyone at the Holden Racing Team.”

“It was so close today but not quite close enough – we had a very good car and we both gave it everything we had.

“The last few laps it was a bit hard on the rear tyres and we faded towards the end and just could not hold on for a podium finish.

“I’m really happy for the team to go fourth from 14th but it’s a bit disappointing not to stand on the podium in the 50th year of Bathurst.