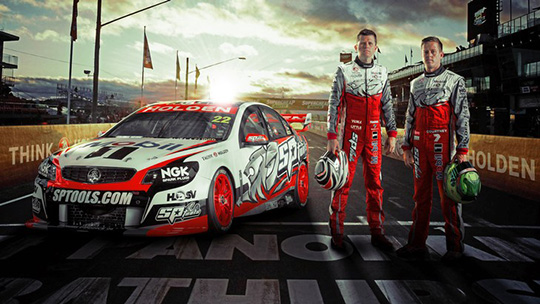 The scene of HRT’s seven famous victories, the Bathurst race track provided the perfect backdrop for the team’s launch ahead of what will be Holden’s 45th season of official factory involvement in Australian motorsport.

Drivers Garth Tander and James Courtney lifted the covers off the 2014 VF Commodore race cars which feature a striking new dayglo scheme and a new position for the famous HRT lion.

“Matching our ambitious livery and increased presence from our major partners, the goal for HRT is to challenge for race wins and podiums on a consistent basis.

“This is Holden’s 45th season of official factory involvement in Australian motorsport and our intention is to give them reasons for celebration.” 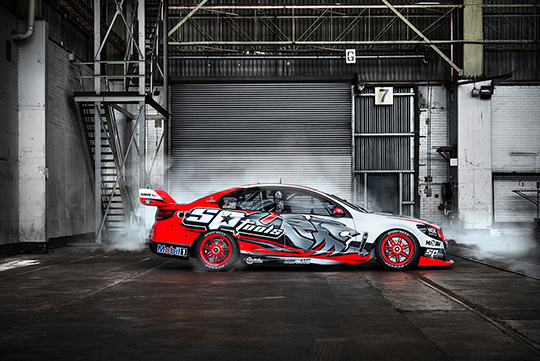 Tander and Courtney complimented Peter Hughes of Holden Design on the striking appearance of their 2014 vehicles.

“As always, Holden Design has created a colour scheme which professionally represents HRT’s proud sponsors, but also stands out on the track,” Tander said.

Courtney added: “Peter came up with a very attractive design for our first VF Commodore last year, and once again he’s produced something spectacular.”

As well as an all-new look, the team’s technical expertise has recently been bolstered by a number of key appointments including Bathurst and Championship-winning engineer Mat ‘Techo’ Nilsson, who rejoins as technical director.

Tander said the personnel changes are a positive for both he and Courtney.

“I’m excited about the changes; with the new personnel we have on board there’s a real buzz around the HRT workshop right now,” said three-time Bathurst winner Tander, who also tasted success at last year’s Townsville and Phillip Island events.

“We’re working hard to make sure that our car is capable of beating everyone week-in, week-out.”

Courtney is equally motivated to start the season strongly in Adelaide.

“We’re going there to be quickest. We’d be lying if we said we were trying to do anything else,” said Courtney, who won last year at Winton.

“Winning races and championships is why we’re in the game.”

HRT also named Greg Murphy and Warren Luff in its line-up for the three-event Pirtek Endurance Cup, which comprises Bathurst 1000, the Sandown 500 and Armor All Gold Coast 600.

Reigning PIRTEK Enduro Cup Champion and former Sandown 500 winner, Luff will line alongside Garth Tander in the #22 SP Tools Commodore, while four-time winner of the Bathurst 1000 and two-time championship runner-up, Murphy will again partner Courtney for a second consecutive year.