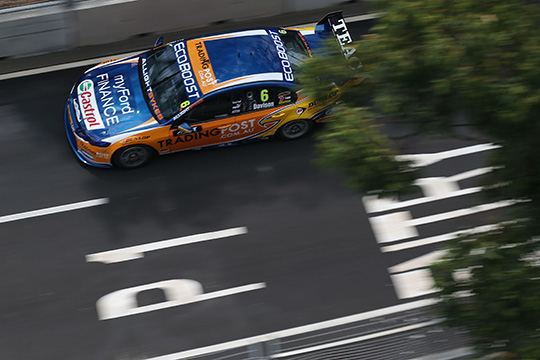 Ford Performance Racing has survived the heat during practice for the weekend’s Sydney Telstra 500 with Will Davison the best-placed of the team’s trio in second.

Davison was happy with the progress he made on worn tyres and was only bested at the end of the session by Jamie Whincup on brand new rubber.

Mark Winterbottom was close behind in fourth and similarly did not use new tyres.

David Reynolds finished an unflattering 23rd due to bending his steering at the start of his final lap when he jumped a chicane. Despite finishing down the order he was pleased with the speed of his car. The only contentious issue was the kerb sensors used on the first two chicanes which drivers’ felt provided inconsistent shortcut warnings.

DRIVERS’ VIEW
Mark Winterbottom – #5 Orrcon Steel FPR Ford
Practice 3: 5th – 1m29.73s
Practice 4: 4th – 1m28.67s
“I need to make a few changes to make the car better under brakes but aside from that it is pretty good all round. The conditions were tough, the track is greasy and the temperature is high which make everything pretty brutal. That said, the car is quick, I feel comfortable and with a few tweaks we will be well-placed tomorrow.”

Will Davison – #6 Tradingpost FPR Ford
Practice 3: 3rd – 1m29.56s
Practice 4: 2nd – 1m28.43s
“It was super-hot today. It will be very tough tomorrow especially if this heat stays around. The car was quick and we’ve got a bit of work to do but we are certainly not far off. I am keen to claim this year’s pole position award which I can do tomorrow so I am focussing on that but obviously I’d like to send Tradingpost off with a win as well. The kerb sensors were a real worry today. They were very inconsistent and in my view completely unnecessary so I hope we sort it out before qualifying tomorrow.”

David Reynolds – #55 The Bottle-O FPR Ford
Practice 3: 8th – 1m29.90s
Practice 4: 23rd – 1m29.95s
“I used green tyres at the end on my last run but I jumped the chicane and bent the steering. While the lap didn’t count I would’ve been on for about fourth place so I am not too worried by my final position. The car is quite pacey and is pretty good overall so I am looking forward to what I am can do tomorrow. The weather is going to be tough but it is the same for everyone.”

Tim Edwards – FPR Team Principal
“We were happy with how the cars ran today but the big talking points will be the heat and the kerb sensors. All of the drivers will be battling the conditions and with tomorrow being hotter I think it will be as much a race of attrition as anything else. The kerb sensors will hopefully get reviewed overnight as there isn’t a big opportunity to gain a lot of time at each one and the readings seem to be a little inconsistent so we are hopeful of a positive resolution.”