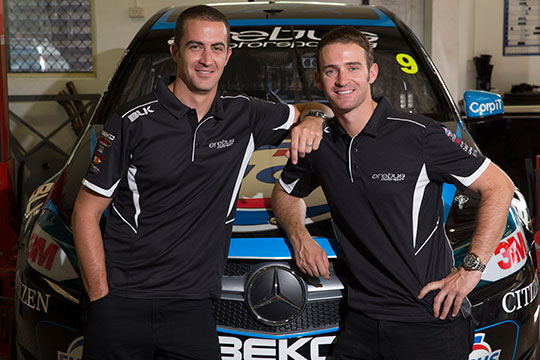 Will Davison and Alex Davison will make racing a family affair when the brothers join forces for Erebus Motorsport in this year’s PIRTEK Enduro Cup.

The Davison pairing marks only the second time in V8 Supercars history that two brothers have joined forces as co-drivers, following on from Todd and Rick Kelly in 2006 and 2009.

Since joining Erebus Motorsport this season, Will has enjoyed an encouraging start with five top-10 finishes from the first nine races of the year, while Alex Davison is without a full-time V8 Supercars drive this year after losing his seat in the Team Jeld-Wen Falcon at the end of 2013.

Alex, previously raced for Stone Brothers Racing from 2009 to 2011 prior to the team’s switch to Erebus Motorsport at the end of the 2012 season and the former Carrera Cup Champion believes that will put him in a good position ahead of the the endurance races.

“I had a really good relationship with everyone in the Stone Brothers days when I was driving here and most of the guys are still here,” reflected Alex.

“It’s great catching up with a lot of my old friends and it feels like I never left, it’s literally feels like it was only yesterday.

“Janelle Navarro, who was one of my mechanics last year, she’s in the team as well so that part of it is fantastic because I don’t have to re-learn a new team like you often do when you join a team for the first time.”

Despite being the older of the Davison brothers, Alex said he admired what his younger brother had achieved in V8 Supercars and was out to learn as much as he could from his younger sibling when they team together.

“Will’s got a CV that lots of people would love to have – I’d love to have his CV. He’s done lots of cool stuff and particularly in V8 Supercars, he’s been ultra-successful and done everything bar win the championship.

“He’s definitely up there in the top two or three guys in the championship and he’s had a lot more consistency and success in V8 Supercars than I have, so I’m in a position where I will be trying to learn as much as possible during the year.”

Will said he believed Alex deserved a regular drive in the V8 Supercars series based on his career achievements to date.

“Obviously Alex has done some cool stuff internationally with the GT side of things, which many people dream of doing,” said Will.

“He’s been successful in V8s, it’s just circumstantial the way these things unfold, why you’re not on the grid, and continuity is really important.

“Anyone that has had pole positions and podiums, which he did late last year, should be on the grid.

Erebus Motorsport Team Manager David Stuart has had a long association with both drivers at other V8 Supercars teams in the past and said the Davison duo would form a strong combination for the long-distance classics.

“It’s a real thrill for me to have Alex join Will for the Pirtek Enduro Cup. They are both very accomplished drivers and we should be a real chance of achieving some positive results throughout the series,” said Stuart.

“With Alex missing out on a full-time drive in the V8 Supercars Championship this year, it afforded us the opportunity to have him partner Will for the endurance events.

“Coming off the back of the team’s fifth placing in last year’s Pirtek Enduro Cup combined with our strong start to 2014, we look forward to progressing with our development and challenging for results when the endurance events start in September.”