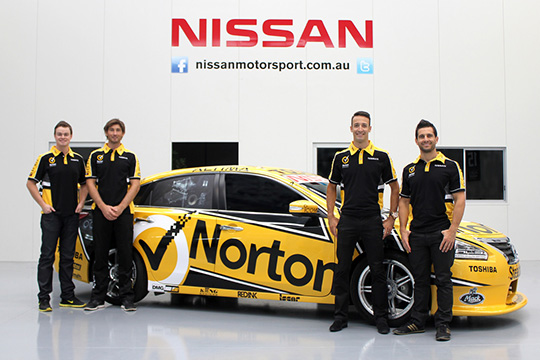 Douglas, currently driving in the Dunlop V8 Series with Image Racing, returns to the team for his second season alongside James Moffat in the #360 Norton Nissan Altima, while Fiore, without a full-time ride this year will partner Michael Caruso in the #36 entry.

Fiore, a V8 Supercars regular for the past five years, returned his Racing Entitlements Contract at the end of last year to focus on his other business interests, but is looking to bolster his preparation for the endurance races with outings in the Dunlop Series later this year.

“I’m really excited to join Nissan Motorsport. This is a great opportunity for me,” said Fiore.

“This is my first drive for a factory V8 Supercars team. While I’m not driving full-time, that was one of my big goals, and I managed to get it with what I feel is the best factory team out there.

“The team is definitely on the up, and anything can happen in the endurance races. We’re not going in to come last. We’re going to be fighting for podium finishes.

“With the progress the team has made in the off-season season and some of the results we’ve seen in the first few events, I reckon we’ll be very competitive later in the season.”

The West Australian’s experience is a huge coup for Caruso and Nissan Motorsport’s second tilt at the two-driver endurance races.

“I’m really excited for the endurances races and teaming up with Dean,” said Caruso.

“Once I heard the news that we’d locked him away, I was pretty pumped.

“The Endurance Cup is a prestigious prize, even through it has only been around for one season, but it’s one of those things you want to get your hands on. I think this year is a good opportunity to get up there and challenge for it.

“The aim is to win, and with Dean, I reckon we’ve got a great shot. Heading into those three races, they’re the big three, and if you can be on top of them, you won’t just be good for the endurance cup, you’ll be in a good spot in the championship.”

Having teamed with Moffat last year, Douglas was regarded one of the fastest non-regulars in the field last year.

“Over the off-season, the team has done a lot of work and development, so this year we’re expecting to move further up the grid,” said Douglas.

”It’s also Moffat’s second year in the team, and he’s driving better than he has.

“I don’t like to put expectations on things. There’s an idea of where you’d like to finish, but all three tracks are quite different layouts. Gold Coast was our strongest, and if things had gone different for us, we could have had a couple of top fives, maybe even a podium.

“While I don’t have any expectations, our aim is to be in the hunt for a podium every time.”

Douglas and Moffat were the highest placed Nissan pairing in the Bathurst 1000 last year and were extremely competitive at the Gold Coast street race.

“It’s great to have Taz back. He fits in really well, not only with everyone in the team, but also inside the car – we don’t have to make any seat adjustments. We’re a good fit,” said Moffat.

“I’m really happy to have him back. He’s racing in the Development Series, so he’ll have plenty of miles under his belt. I think he’ll be good form by the time we get to Sandown.

“The championship is so close these days, but I feel like we’re a good combination. Last year, I don’t think we had the package to be a real threat, but certainly Gold Coast we had good speed, and hopefully with some improvements as the year goes on, we should be in a better spot at all three races.”

Both drivers will get to drive the Nissan Altima V8 Supercars during the team’s three official test days.