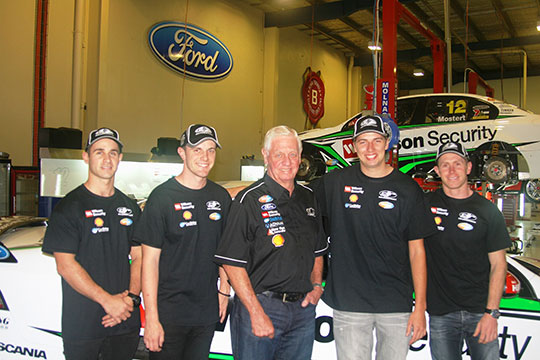 Wood will partner Chaz Mostert in the #12 Wilson Security Falcon at the Sandown 500, Bathurst 1000 and the Gold Coast 600 events, while Walsh will drive alongside Tim Blanchard in the #17 entry.

“This the first time we have ever gone to the long distance races with a bunch of young guys in both cars,” said team principal, Dick Johnson.

“We have had some great names at DJR over many years including JB (John Bowe), Paul Radisich, Gricey (Alan Grice) and Alan Jones. But the team is entering a new phase and these guys are the future of the sport.

“There is plenty of pressure on them for sure, but we will guide them through all that and see how they perform. As a team owner I am really looking forward to it.”

The co-driver announcement comes after DJR’s  general manager, and Dick Johnson’s son, Steve Johnson revealed he is to co-drive with Erebus Motorsport V8 in this year’s endurance events.

“We sat down quite early in the season with Steve and gave him a clear run on making his decision,” continued Johnson.

“I know he was keen to have a crack at Bathurst as a driver only and that meant he looked at signing with another team.

“We set his and our deadlines in place to ensure everyone’s interests were covered. We agreed as a group to sign Dale and Ash to the DJR line up and Steve then finalised his arrangements.

“We have the two best runners in the Dunlop Series in our cars and recent history shows these guys do a very good job.”

A seasoned Dunlop Series campaigner and endurance driver, Dale Wood believes he and Mostert can mount a strong endurance offensive.

“I have driven at Sandown and Bathurst for the last four years now, but the chance to drive for DJR and to line up with Chaz is a great opportunity,” said Wood.

“The Wilson Security Team is clearly starting to show some great form and I am sure that Chaz and I can really surprise a few people.

“There is no more famous team than Dick Johnson Racing when it comes to Bathurst so I am really proud to be part of the 2013 line up.”

For Walsh, Sandown will mark his first V8 Supercars start, but the Dunlop Series leader has recent experience of Sandown and Bathurst having competed there in both Formula Ford and the V8 Supercars development series.

“We have worked very hard this year to get on the radar of the main game teams,” said Walsh.

“I am rapt to be making my enduro debut with a team like Dick Johnson Racing. I believed my Dunlop Series form would have a bearing on this season so it has now come together really well. I am very grateful to Dick and the whole DJR Wilson Security team for having faith in me.

“Tim and I get on well so I am very confident we can really do a good job for the team.”

The new signings will be on track in the co driver session at the Sucrogen Townsville 400 in July.