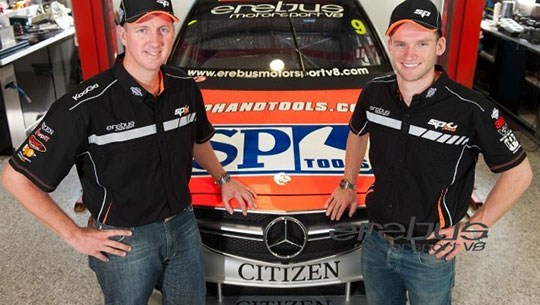 It will be the first time in Johnson’s V8 Supercars career he will not be behind the wheel of a Dick Johnson Racing prepared car.

After a 13-year spell as a full-time driver, Johnson stepped into the role of general manager role at Dick Johnson Racing earlier this year, but after assessing his options, made the call to switch teams for the enduros.

“Today’s announcement about me driving for Erebus Motorsport V8 in the endurance series is really exciting for me,” said Johnson.

“For all my career I’ve raced for Dick Johnson Racing under the Ford banner, so I’m now not only driving for a different team, I’m also driving a different marque of car.

“Of course my decision not to drive at DJR was a big one, but I believe the opportunities the team has to develop young talent will be a big focus as DJR re-emerges. It is important they capitalise on these objectives and in turn I can concentrate my attention on the long distance races.  I will have no other hats on and I can concentrate 100% on doing the best job I can with the Erebus team and with Maro.

“It’s going to be very interesting for me to see how another team operates and I’m hoping this will help me further develop as a driver.  Working with new people and forging new relationships in such a short time is going to be an enjoyable challenge.

“In the past I’ve been renowned as an endurance specialist, so I’m expecting to do well.  I think the SP Tools Racing entry will have some strong results over the endurance series.  Maro has certainly done a lot of racing in his career and he is a world-class driver.  Hopefully I can help him learn the tracks, in particular Bathurst, but I’m sure there are many things he can also teach me.

“It will definitely be a team effort, both Maro and I are here to do well and we are really looking forward to working together.”

Series rookie Maro Engel has not raced at any of the three endurance circuits – Sandown, Bathurst and the Gold Coast 600 – but believes Johnson’s vast endurance experience will help him quickly learn the tracks.

“It’s hugely exciting news to have Steve on board as my co-driver,” said Engel.

“It’s going to be his 19th Bathurst and he has a long successful career in racing and a very good track record at endurance races.


“I’m looking forward to working with him closely to ensure we can be as competitive as we can be. I’m sure he will have some secret tips he can share with me about all three endurance tracks – especially Bathurst, which I like to refer to as the ‘Blue Hell’ because it is the Australian version of Nurburgring Nordschleife which is known as the ‘Green Hell’.

“I think I’ll be able to learn a lot from Steve so I’ll be listening very carefully to all his advice and comments.  In terms of car development, I think he will also be able to give us great feedback as he has driven a number of new V8 Supercars over the years.

“The endurance races are the most exciting part of the season with Bathurst being the pinnacle and now with Steve on board I am really looking forward to it.  We want to get good results and although it is my first time at all these tracks I’m sure we will counteract that with Steve’s huge amount of experience.”

“We are very pleased to be able to sign Steven Johnson for our endurance driver line up,” said Maddison.

“Steven will be a strong co-driver for Maro in the #9 SP Tools Racing entry with his extensive experience, and this will allow the team to focus on strategy to get the most from the driver pairing.

“I think the rookie and veteran combination of Maro and Steven will work very well and their individual strengths will complement each other as they work closely together over the next few months.

“With 18 Bathurst’s to his name there are few who can support Maro in his first year the way that Steven will.  Betty is equally pleased to see Steven compete in this year’s V8 endurance events with the Erebus Motorsport team.”