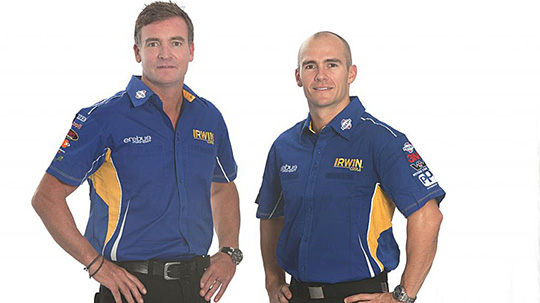 Erebus Motorsport V8 has announced that Craig Baird will partner Lee Holdsworth in the #4 IRWIN Tools car for this year’s V8 Supercar endurance races at Sandown, Bathurst and the Gold Coast.

Baird’s signing completes Erebus Motorsport’s endurance event driver line-up; the team having previously announced Steven Johnson will team up with Maro Engel in the #9 SP Tools entry and Andrew Thompson is to partner Tim Slade in the #47 Heavy Haulage entry.

The New Zealander has made regular endurance appearances since quitting the series full-time at the end of 2005 and partnered Holdsworth last year at Sandown and Bathurst, where they netted a pair of eighth places in the Stone Brothers Racing Ford Falcon.

The reigning Porsche Carrera Cup Australia champion claimed his 10th Porsche one-make championship victory in 2012, adding to an impressive record of international success in single seater, sports cars, touring cars and Porsche racing, including full-time stints in V8 Supercars in 2004 and 2005 and the British Touring Car Championship in 1998.

“This year drivers haven’t changed, but obviously the car has changed a lot,” said Baird.

“It’s been a steep learning curve for me, there’s no doubt about that. But if we look at the progress through the year, when it gets to the point of me hopping in the car, it looks like they’re heading in the right direction.”