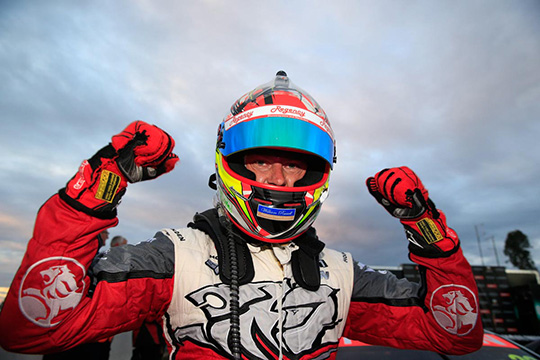 James Courtney has taken a commanding victory in the final race of the Coates Hire Ipswich 400 at Queensland Raceway, but it was Jamie Whincup who emerged the big winner as the championship lead changed hands.

After running second to pole-man James Moffat in the opening stint, a perfectly played out strategy saw Courtney take the race lead from Craig Lowndes following the final round of pitstops. Holding the position to the flag, the Holden Racing Team driver crossed the line with a comfortable 6 second cushion over his Red Bull Racing Australia rival at the end of the 200km race.

Chaz Mostert rounded out the podium after holding off a strong challenge from Moffat on the final lap. Moffat, who had earlier landed his first V8 Supercars career pole position had to settle for fifth after throwing away fourth to Scott Pye, running wide at TURN 3 launching a final attack on Mostert.

The win moves Courtney up to fourth in the V8 Supercars Championship standings, and with three second-place finishes over the weekend Lowndes moved up to third. But it was a disastrous race for Mark Winterbottom who lost the title lead to Holden rival, Jamie Whincup.

After a pair of sixth-place finishes in Saturday’s races, Winterbottom crossed the line in 22nd suffering a left-rear puncture on lap 43, just seven laps after his scheduled stop. Finishing sixth, Whincup moved to the top of the championship standings, relegating Winterbottom to second, 15 points back.

Walkinshaw Racing’s Nick Percat grabbed seventh place on the line from Michael Caruso as the Nissan spluttered over the line having ran out of fuel on the final straight, while Garth Tander and Shane van Gisbergen completed the top 10.

The Championship resumes in three weeks time with the Sydney Motorsport Park 400 on August 22-24.