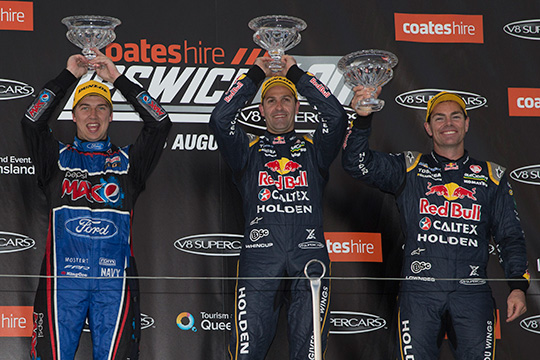 Jamie Whincup has made it two wins from two in the Coates Hire Ipswich 400 leading home another Red Bull one-two finish at Queensland Raceway after a controversial incident handed him the lead.

A battle for the lead between pole sitter Scott McLaughlin and Michael Caruso boiled over after contact between the two saw spun McLaughlin out of the race lead on lap 22. Caruso’s optimistic dive in the Nissan Hornet at turn 6 led to a drive-through penalty and put both cars out of podium contention. Valvoline Racing GRM’s McLaughlin re-joined in fourth but struggled and dropped down the field to finish 19th, while Caruso finished 24th.

Whincup was gifted the lead after Caruso served his penalty but still had to fend off his Red Bull Racing Australia teammate Craig Lowndes over the closing laps to grab his second win of the weekend and the team’s second 1-2 finish.

The final podium place was wrapped up by Ford Performance Racing’s Chaz Mostert who made up four positions to end up in third.

Shane Van Gisbergen ran a lonely race to finish in fourth in the Tekno Autosports Commodore, ahead of Jack Daniel’s Racing’s Rick Kelly who grabbed a top five finish for Nissan after a tense battle with Mark Winterbottom in the final laps. Ford Performance Racing’s Winterbottom passed Kelly twice on the run to the first turn but both times Kelly perfectly executed a crossover to take the place back by turn 2.

Nick Percat was unable to capitalise on the battle between Kelly and Winterbottom and finished just behind the pair in seventh.

Holden Racing Team’s Garth Tander made another charge from outside the top ten to finish in eighth place, while Fabian Coulthard took another top ten finish in his Lockwood Racing Commodore, splitting the two HRT Holdens with James Courtney in tenth.

Making the biggest gain across the race was Nissan Hornets’ James Moffat. After retiring in the opening race with a puncture, Moffat came from 20th to finish just outside the top ten in 13th.