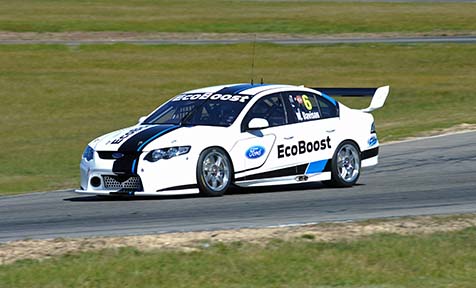 Ford Performance Racing’s first Car of the Future has completed its maiden test day without issue after another trouble-free day of running at Winton Motor Raceway in north-east Victoria in near-perfect conditions.

All three of the team’s drivers were on hand to sample the 2013-specification Falcon which was unveiled last Monday at the same track.

The car, the first to run without prototype parts in the full V8 Supercars control spec, covered more than 120 laps as the team spent the day working on a range of set-up changes to identify how the car reacted to each.

Mark Winterbottom drove the car for most of the morning before handing the controls to Will Davison.

David Reynolds then drove his first ever laps in a Car of the Future chassis and was happy with his outing.

“It is different though I did like it,” Reynolds said after more than 50 laps in the car.

“You need to re-think how you drive, where you position the car and use every input a bit differently. I’ve only done one run so compared to Mark and Will I don’t have much to go on but for a first up drive it was great.”

The test was one of two manufacturer test days allocated to the team to be used this year and came after the team’s shakedown last Monday and Tuesday.

FPR Team Principal Tim Edwards said the test was another positive step for the factory Ford team’s preparations for next season.

“To have run the 2013 package twice within a week and complete more than 200 laps without any issues is a real credit to the team and allows us to push on with building the rest of our cars as we know what we have works,” Edwards said.

“We have put good kilometres on the mechanical package we’ll be racing next season and now have a large amount of data to go through before our next test day after Bathurst.”

FPR will be on track again this weekend for the Sandown 500, the first of the 2012 endurance races.