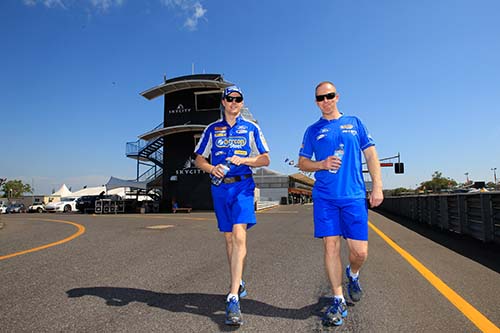 Ford Performance Racing’s trio of Falcons will have three driver pairings capable of challenging for victory in the first endurance race of the season at this weekend’s Sandown 500.

Mark Winterbottom is one point off the series lead and with former team-mate Richards alongside the pair are one of the race favourites.

Will Davison will share the car for the first time with McIntyre and Davison believes the pair have gelled well.

David Reynolds will also form a new partnership with Canto and with Reynolds’ growing confidence the duo are considered a combination to watch.

FPR has finished in the top-four of the last seven pre-Bathurst 500km races.

Sandown also holds happy memories for the team as it is the scene of Winterbottom’s debut championship race (2003) and race win (2006) and is a track where Davison and Reynolds have tasted success.

The Bottle-O pilot won the 2004 Australian Formula Ford Championship at the track on the final lap of the final race of the season.

“Sandown is track I love – it is where I debuted, won my first race and having won the 500 before I know just what it means to the team if we were to do it again. The endurance races are why we are in the championship as there is nothing bigger than these next few races. Richo and I are on the same page when it comes to driving the car and we have been strong no matter where we’ve raced so I think if we can qualify well and keep our noses clean early we’ll be in with a great chance.”

“It will be great to get back racing a V8 Supercar and particularly around Sandown. I’ve done lots of preparation with test days, co-driver practice sessions at other tracks and my fitness is good so I’m as ready as I can be. FPR is going really well and I’m really looking forward to what lies ahead. The co-driver race is a good warm-up ahead of the race proper and while it doesn’t determine the final result it goes a long way to potentially having us start from pole.”

“I am pretty excited that the 500 is back at Sandown as I’m a traditionalist and always preferred the pre-Bathurst endurance race there. It kicks off an exciting time of the year and one which is crucial for everyone in the title battle. You always want to win the enduros as they are huge events but there are also a lot of points on offer. It’s nerve-racking but exciting. Having co-drivers adds another element of team work and endurance races are always about strategy so we need to make sure we’re racing at the front. If we get the strategy right and piece everything together the race will be a great challenge.”

“I haven’t raced at Sandown since 2007 but I tested there with the team at the start of the year so I’m looking forward to racing there. Will and the team have been on form this year and I am relishing the chance to play my part in the championship battle. I’ve been testing a lot for the team in recent times and I’ve also raced a 400km race back in New Zealand in the last fortnight so I am as prepared as any co-driver can be. The event is returning to its traditional home and as it’s the team’s home town we are expecting good home ground support.”

“I am looking forward to Sandown as it is the first track I’ve been to for a second time in this car. The Bottle-O Ford has a good record racing there and we were quick at the test at the start of the season when we knew nothing about it so with half a season of knowledge we will be much stronger. Dean is very experienced and a very solid pair of hands so with the current form we are enjoying coupled with how comfortable I am with my co-driver I am really keen to get racing.”

“The car is the strongest I’ve ever had in my five years with FPR, results are great and the pit stops and strategy have been very good so everything has come together at the right time. I haven’t raced at Sandown for a while so will have to get my eye in as I didn’t do many laps at the start of the year but that is the same for most co-drivers. Our driver changes are good and Dave and I like the same set-up so I’m looking forward to the race and have confidence we can continue the strong run for car 55.”

“The Sandown 500 is one of the cornerstones of our season so it is great to see it back where it belongs as the Bathurst warm-up. That said 500km of racing is anything but a warm-up and given our recent run of strong form we head into the endurance part of the season confident in the knowledge we have tested well and have everything sorted. Our three driver pairings are very strong and we are looking forward to good home crowd support.”

DESCRIPTION: Sandown is a fast and flowing circuit with long front and back straights peppered with tight right-angled corners. Particularly challenging is the tricky high-speed, downhill section marking the end of the back straight. The track can be treacherous in the wet and very exciting in the dry. Good spectator viewing areas are abundant. The circuit has regained its endurance status in 2012 with the return of the Sandown 500.