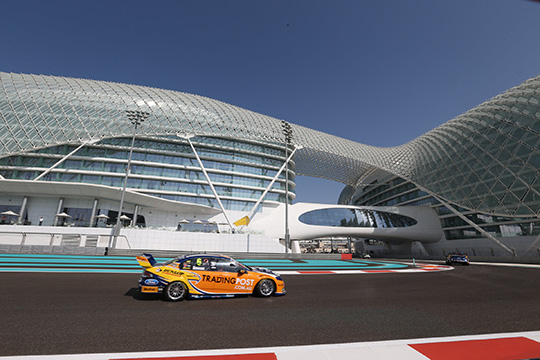 Davison outclassed the entire field in the event’s unique qualifying format, setting the three best times in the 20-minute session to give him top spot on the grid for all three sprint races.

In a dominant display he was the only driver to set two laps in the 2m11s bracket.

Mark Winterbottom was less happy with the handling of his car and will start the races seventh, fifth and seventh.

David Reynolds struggled early and will start races one and two from 11th and ninth, though has sixth on the grid for the final race.

The unique qualifying format saw each driver’s top three lap times count for their grid slot for each of the weekend’s three 12-lap races. Their fastest lap was the grid slot for race one, the next-best for race two and so on.

In practice the team got its first taste of the full 5.5-kilometre Grand Prix layout with the sessions largely spent exploring the limits on a very dusty surface before refining set-up work before qualifying.


“I struggled a bit with car speed and it proved a tough session. Obviously Will is fast but I just can’t do what he is doing at the moment so we have a bit of work to do. We need to have a look at things and try and tune it up for tomorrow and get it right for the race. We aren’t too far down the grid so I’m positive we can do something in the races.”


“It is brilliant to be on pole for all three races. It was a really interesting day and the track was so dirty and slippery in practice. We backed ourselves, made some really good changes before qualifying and the car was absolutely mint. It was a matter of working to the format and trying to fit three good laps in. It was great to get one pole in but three is brilliant. There are three races to go but we are starting in the ideal spot for each.”

“The car is much better now than it was in practice but we do have some work to do. We made some changes ahead of qualifying so it is not too bad and I’m relatively happy compared to this morning in practice. What is done is done and the format was always going to mean that those with a good car would qualify well for all three races. We’re certainly in the hunt.”

Tim Edwards – FPR Team Principal
“Today’s qualifying format was always going to be interesting but to come away with three poles for all three races is a real credit to the team. Will was consistent and just plain fast which made the difference so he is well-placed for all three races. Mark and Dave didn’t enjoy as much satisfaction but with only 20 minutes to qualify there was always going to be a mix of results. We have some work to do but overall we are well-placed for the rest of the weekend.”