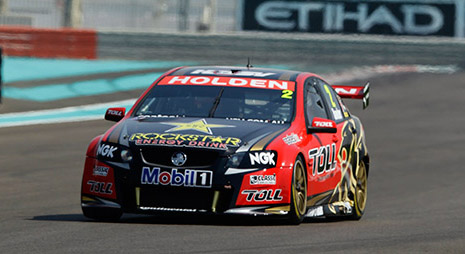 The Holden Racing Team’s Garth Tander and James Courtney will both start tomorrow’s first V8 Supercar race at the spectacular Yas Marina circuit inside the top 10.

At the conclusion of a unique Friday qualifying format, Tander claimed two sixth starting positions and an eighth for this weekend’s three race format in what was a frantic 20-minute contest.

On the other side of the HRT garage, Courtney also delivered a strong qualifying performance and will start from 10th, 11th and 14th respectively for the three scheduled 12-lap sprints across Saturday and Sunday.

“Qualifying was pretty chaotic today but we are very happy to be inside the top 10 for the beginning of all three races this weekend.

“The races are going to be interesting – that’s for sure!

“We feel as though our pace will be competitive so we’ll tune the car up overnight and see where we end up this time tomorrow.”

“It’s been a tough day today but we’ve come away with some solid qualifying results.

“We are going to have to make sure that we get good starts to the races in order to move forward through the field as quickly as possible.

“The cool suits will be working overtime but we’re happy to be back at the Yas Marina circuit and I’m looking forward to backing up the good result that we had here last year.”