Skip to content
Ever since the inclusion of Nissan and Mercedes to the V8 Supercars series, there have been calls for further performance parity after the two marques, mainly the former, struggled for straight-line speed. This year, Nissan Motorsport’s prayers appear to have been answered after the third different iteration aero kit for the Altima showed true pace at the recent V8 Supercars pre-season test following a seven-day homologation process alongside the Holden Commodore and the newest car on the V8 Supercars’ grid, the FG X Falcon. V8SCGlobal attended the sydney.com test day at Sydney Motorsport Park to see what’s gone into making this season’s crop of cars so competitive.

Having a look at this year’s Nissan Altima is almost like looking at a whole new car. So much has changed over the summer break that it is hard to find a major aerodynamic component that hasn’t been tweaked by Nissan Motorsport and NISMO in Japan. To start; the front of the car. It seems that the air dam that sucks in the vital air to cool engine components and the brakes has narrowed. This allows more air to be deflected and pushed around the car as well as creating extra front down-force. While this may affect cooling compared to previous years, the Nissan’s engine has never had an overheating problem. There are also changes to the wheel arches. Narrowing the guards and creating less drag on the side of the car should help in the quest to find the straight-line top speed. 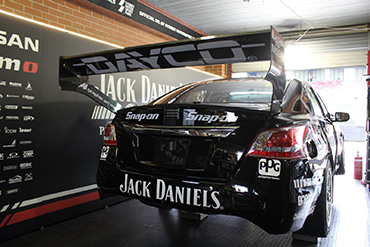 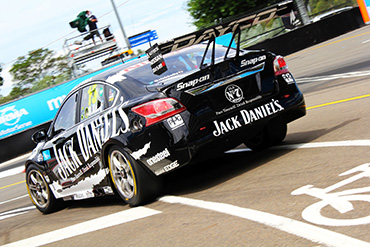 The most drastic change to the car comes at the back. The rear wing has been almost completely changed. Instead of a centre-post mounted rear wing above the pit limiter light, it is now similar to the rest of the field by being end plate mounted. It is most similar to the Mercedes’ wing as it is mounted only on to the original boot instead of being partially mounted on plates that go over the depth of the boot. However, there is one noticeable difference between the two wings. While that of the Mercedes-Benz E63 AMG is relatively short and still hangs over the back of the car, the Nissan’s is so far back it’s almost in a different postcode. If you were to draw a white line on the edge of the boot on both cars and down on them from above the Mercedes’ wing would easily cover the line but the Altima’s would still allow you to see the ground underneath. This package has had an immediate effect with brothers Rick and Todd Kelly topping every session on Saturday’s test day, and with an engine upgrade not far off this will serve as a much needed confidence boost for the team. Although Todd Kelly was keen to point out that the cars are still similar to what they last year aero-wise and it’s the combination of the geometry, the set up and the engine development that has seen the improvement.

Nissan wasn’t the only manufacturer to undergo aero changes with Ford and Holden both updating their packages before the test day. Ford used the chance to hone in the new FG X shell for Winterbottom, Mostert and Ambrose. Weighing in slightly less than the FG, the new shell included new front and rear bumpers, a new bonnet and new diffuser, modifications to the guard shape and changes to the rear lip on the front splitter, while the rear wing is also wider and sits further back on the bootlid. A complaint of the previous FG body work was that the rear would become unstable at high speed, something that Ford wants to eliminate with the last-generation Falcon racer. The only concern in the pre-season test was that the new front bonnet was wobbling majorly at high speeds, something that wasn’t picked up at the aero test. After Nissan’s successful Saturday it was the turn of Prodrive Racing Australia during Sunday’s testing, with Mark Winterbottom fastest in the opening two hour session, Marcos Ambrose on board his DJR Team Penske Falcon fifth in the final test session and Chaz Mostert blitzing the field in the shootout. Having struggled at this circuit in the past, it was a fantastic debut for the FG X.
At first glance, it’s difficult to see what’s changed with the Commodore’s aero package. Look a little closer though and you’ll see that in a bid to reduce drag there’s a small change to the rear wing position. The rear wing is now slightly higher up and mounted a little further back, creating more downforce. It does so by exposing itself more to clean air rather than disturbed air. During the Super Test, the Holden drivers were evenly spread across the field.

Erebus Motorsport missed out on updating its aero packages, a possible hint that the team could be struggling to keep up with the pack. In its second year, Volvo also decided not to update its package, unsurprising given the speed and downforce levels of their cars last year.

Time will tell how effective the changes have been and also how the cars with updated packages will perform compared to those that haven’t changed. With the high-speed, tightly packed Adelaide Parklands circuit first on the calendar, all teams will be nervous heading in to see how well their new parts perform under race conditions for the first time.